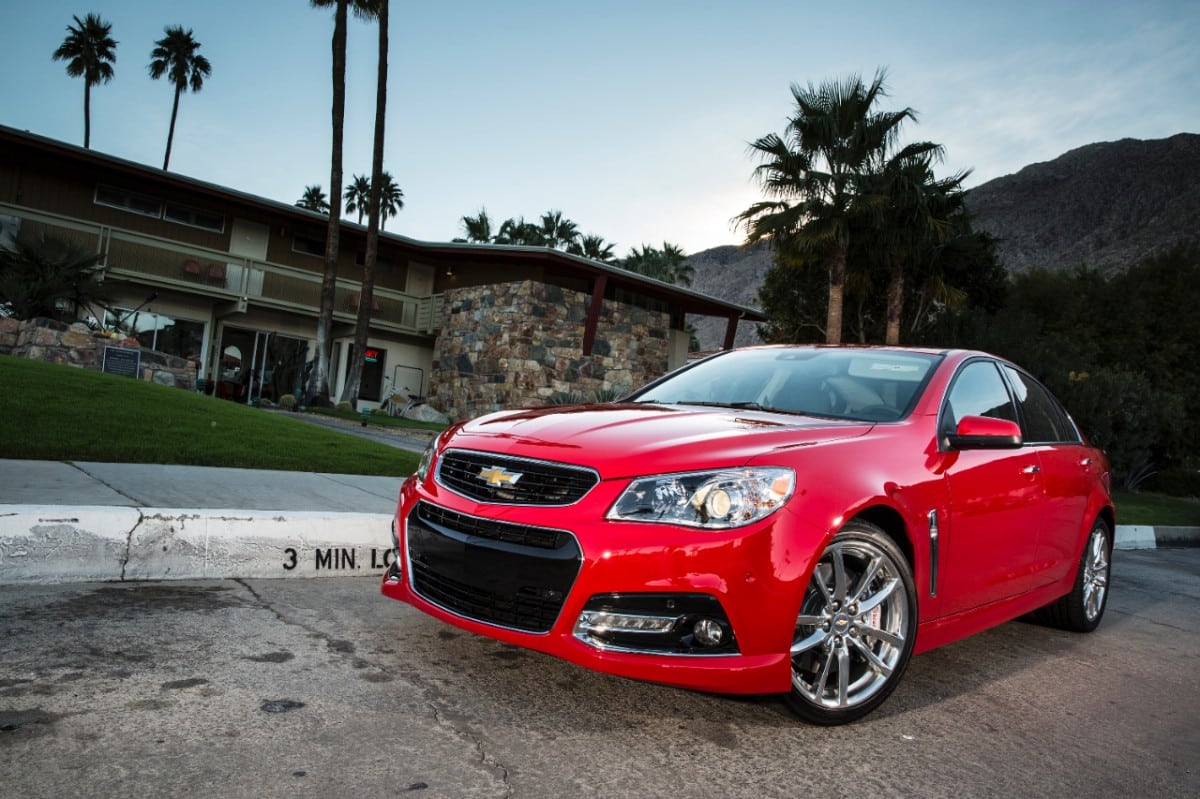 When General Motors reorganized and eliminated some of their brands, they disappointed fans of some of those brands. The Pontiac fans still gripe about the “watered down” Chevrolets the company makes. So, you have to wonder if my tester this week will pacify the Pontiac enthusiasts out there. The 2014 Chevy SS is the company’s first V8, rear-wheel drive (RWD) performance sedan since the 1996 Pontiac G8. There is a good reason GM assembled the SS in Australia. GM has an entire car line in Australia called Holden. And Holden has manufactured a twin to the SS for several year – the Holden Commodore. The 2014 Chevy SS may have similarities to the Holden Commodore and the Pontiac G8, but the Chevy SS is a sedan that has so many excellent qualities it’s hard to believe it is in its first production year. Generally, first-year vehicles have issues and bugs to work out, but my week with the SS revealed a stellar car that raises the bar and shows that GM still knows how to make high-performance vehicles (that carry a Corvette moniker).

On looks, the SS is not intimidating. It looks like many other sedans out there. You could even call it a bigger, more glorified-looking Malibu. Faux side vents and HID headlamps with LED running lights are about the only hint of the rest of what makes the SS something special. Under the hood is a similar engine to the Corvette. A 6.2-liter V8 engine powers the SS and produces 415 horsepower with 415 lb./ft. of torque. The power of the SS is absolutely exhilarating. Mate that with a silky-smooth six-speed transmission (complete with paddle shifters) and it’s a high-performance car. The SS even has Brembo brakes which is good when you need to stop that kind of horsepower. But unlike the Corvette (where you expect it) and even the Dodge Charger SRT8, the SS has such understated performance. Instead of having some growling engine, or some overly aggressive design, the SS goes about its business in a refined way, right down to the driving performance. The suspension is tuned so precisely that it offers driver and passenger a calm, comfortable ride. The handling might be even more impressive than the actual power output. Cornering is tight and pristine and Chevy’s StabiliTrak system offers a controlled driving performance (from a rear wheel drive vehicle nonetheless). Add in extra safety features like forward collision alert, lane departure warning and blind spot alert and you have a special sedan. Perhaps that’s what SS stands for. Inside the 2014 Chevy SS continues its understated special ways. You are surprised to find such nice amenities and luxurious touch points inside this sedan. But throughout there is amazing consistency and attention to detail. High-quality stitching is found throughout, and soft-to-the-touch suede materials are found everywhere. Compile that with ample leg and head room, and all five passengers will be quite comfortable as you bolt off the line, displaying the impressive horsepower. The trunk has 16.4 cubic feet of space and even has a full-size spare option. If there was one flaw I didn’t like about the interior of the SS it was the racing-style seats. The shoulder area was a little too constricting for those with broader shoulders. Had the seats been more comfortable, I’d call the interior of the SS flawless.

The market is small for rear-wheel drive performance sedans. But compared to its limited competition, the SS has good fuel economy. With an EPA rating of 14 city and 21 highway, the SS does come with a $1,300 gas guzzler tax penalty. In a week’s worth of heavy-footed driving, I averaged about 17 MPG. That’s better than the average I got with the Chrysler 300 SRT8.

The 2014 Chevy SS has only one trim which makes it easy to price and also means it’s loaded with great standard equipment and technology including an 8-inch touchscreen system, heated and cooled seats and 19-inch forged alloy wheels (which only partially conceal the sexy red Brembo brakes). Standard vehicle pricing is $43,475, plus the gas guzzler tax. The final MSRP of the SS was $45,770 making it lower than the 300 SRT8 and obviously significantly lower than the Corvette. The Chevy SS is not getting a lot of marketing from the carmaker, and that’s a shame, because this car is something special and a contender for one of my favorites of the model year.