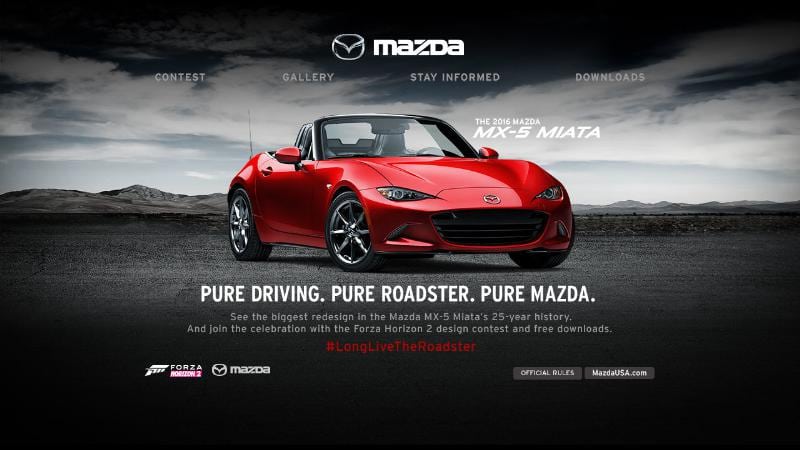 Mazda is teaming up with XBox to launch the new 2016 MX-5 Miata, marking the second  year that the automaker has joined forces with Microsoft’s gaming platform. The MX-5 Miata will feature in the new Forza Horizon 2 game, allowing players to enter the 2016 Miata in the Livery Design Contest.

The Mazda MX-5 Livery Design Contest, which is now live through January 4, 2015, will give Forza Horizon 2 players the opportunity to design the livery for the 1994 Mazda MX-5 currently available in-game. Two finalists will be awarded a trip in March to South by Southwest 2015 for the final design showdown. The winner will walk away with a new 55-inch curved TV, audio music system, Xbox One Kinect console and one MadCatz Racing Wheel estimated at $3,499.95. Additionally, the winning design will be made available in Forza Horizon 2 for all Xbox One and Xbox 360 users as a free gift.

“In addition to shining the spotlight on the 2016 Mazda MX-5 through the partnership, we also wanted to give Forza fans a way to engage and pick up some cool prizes and see their work featured in the game,” said Russell Wager, vice president of marketing, MNAO. “Fans of the Mazda MX-5 are some of the most passionate enthusiasts out there and we look forward to seeing the creativity that comes from this contest.”

Full rules and requirements can be found on the Mazda hub of the XBox 360 and XBox One. Another contest is also forthcoming, to be announced at South by Southwest 2015.