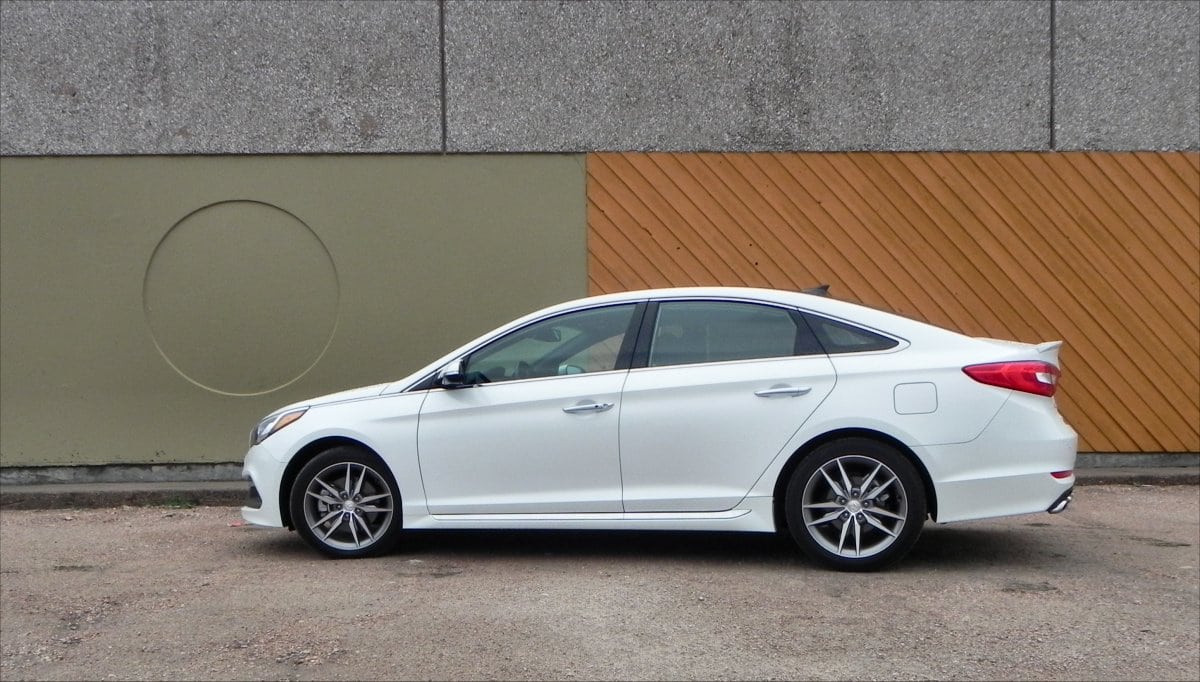 2015 Hyundai Sonata is Korean for Sexy

The 2015 Jeep Wrangler has everything the Jeep fan will want. This is one vehicle that has not changed much in decades because it has no need to. The Wrangler is pure fun times with an optional top.

Back when the Willys war surplus Jeeps were hitting the market, they featured very different underpinnings from today’s 2015 Jeep Wrangler. Improvements to the drivetrain, tires, chassis, and more have been made over those six decades. In terms of body design and general characteristics, the 1950s Jeep, the 1980s Wrangler, and today’s Jeep Wrangler are all very similar. Of all of the iconic American vehicles still on the road today, in fact, the Jeep Wrangler is probably the most true to its roots in terms of styling and audience focus. The reasons for buying one haven’t changed in 60-some years. Neither have the always-optional roof, doors, windshield, etc.

Our test drive was in a 2015 Jeep Wrangler Rubicon Hard Rock. This is basically a Jeep Wrangler with a Rubicon package (which adds some styling and a lot of offroad goodies) with the Hard Rock trim addition, giving it even more offroad goodness.

The 2015 Wrangler can be had in a two-door (as we drove it) or four-door Unlimited chassis. Trim levels include the Sport, Sahara, and Rubicon with the Hard Rock sub-trim being available only for the Rubicon package and the Willys Wheeler sub-trim being available only for the Sport. The basic point is that packaging depends entirely on what you plan to do with your Jeep. Those who want a cool-looking Wrangler with good offroad capability, but who aren’t interested in hardcore slogging and climbing, will be happy with a Sport. Those who need a desert runner with some bigger wheels, heavier suspension, and so forth will want the Sahara. Hardcore offroad enthusiasts who love fording rivers, exploring crevices, and jamming the beach will want the Rubicon. People who don’t need serious offroad but want a more nostalgic feel go with the Willys sub-trim. Hardcore enthusiasts who also want a few extras for hitting the Moab Trail will want the Hard Rock option for their Rubicon.

If you don’t fit into any of those groups, you should probably just get a normal SUV like the Cherokee. It’s been my experience that those who want the “coolness” of the Wrangler look rarely keep their purchase for long once they find out how badly it does the daily driver thing.

The Hard Rock edition is hardcore. From its 9-speaker Alpine stereo – which in my possession was obsessed with SiriusXM Liquid Metal – to the very articulate front wheel reach and terrain-defying radials, the Wrangler Rubicon Hard Rock wants nothing to do with driving around town or anything involving pavement. Huge tires, gigantic bumpers, and the aggressive hood all say “Gimme dirt.”

All of the classic Willys Jeep and Wrangler bits are there. The square box with a smaller square in front, the half-trapezoid fenders, the spare tire hanging off the back gate, the slotted grille and round headlamps.. all there.

Amazingly, the only thing that isn’t optional on the 2014 Rubicon Hard Rock is the stereo and drivetrain. The hard-top roof, the doors, the soft top cover.. all either purchase options or removable. Even the windshield doesn’t have to be there.

Above all, though, everything looks really cool and is all highly functional.

Under the 2015 Wrangler’s Hood

The only engine available for the 2015 Wrangler is the 3.6-liter V6, producing 285 horsepower and 260 lb-ft of torque. Little else is needed, really. Tuners who want a beefy V8 will probably just swap one in anyway and anyone who wants “fuel economy” and a four-cylinder doesn’t need a Wrangler and probably doesn’t know about the crap AMC 4cyls from back in the day.

For transmissions, a six-speed manual or five-speed automatic are offered. Personal preference is the most likely motivator between the two choices as they are equally capable. The transfer case is a relatively short throw hi-low affair in a basic J configuration.

One thing to note about the six-speed manual is that, at least in the one I drove, it showed its disinterest in highway driving by making it very difficult to get into that top gear. It was as if it wished to berate me for choosing to take such a wonderfully capable machine out of its environment and onto the freeway.

Everything about the Jeep Wrangler is aimed towards rugged function. Niceties are an afterthought. This means that the total lack of insulation in the roof, the tall climb into the Wrangler, and the absence of anything resembling built-in high technology is the norm. Sure, our Wrangler had Chrysler’s excellent Uconnect infotainment system, but it seemed more of an afterthought than a standard – almost as if it’d been installed at an aftermarket shop instead of the factory. This doesn’t mean it was any less functional or didn’t deliver on all of the promise that Uconnect has, it just seemed out of place in the otherwise old-school Wrangler interior.

The throwback appeal of the Wrangler Rubicon is difficult to describe well. The seats are comfortable, but not cushy and the back seats are still a plain bench that would be as at home in a park somewhere they are in the rear of the Wrangler. Things rattle randomly and everything has the impression that it’s OK to grab whatever it is and hang on for dear life when things get hairy. In other words, nothing in the Jeep is luxurious, but everything in it is built to last and can withstand your abuse.

This means that the 2015 Wrangler Rubicon is not a “daily driver” with all the comfort that implies, but is instead a purpose-built machine with a singular focus.

On and Off the Road in the 2015 Wrangler Rubicon

The big, beefy tires, solidly-constructed wheels, heavy suspension, solid axles, and heavy bumpers of the 2015 Wrangler are made for going out into the wilderness and finding the great unknown. On the road, the Wrangler is loud, has little climate control, sports a horrible ride, and is far from comfortable. Off the road, the Wrangler is confident, more than capable, and everything a Jeep should be.

The Jeep Wrangler Rubicon Hard Rock wants to get dirty off the beaten path and it wants you to get dirty with it. Most of our time in the Wrangler was spent forging new paths through a steer pasture, blasting through snow drifts at the edge of a field, and climbing rocks on top of a bluff overlooking farms in southern Wyoming. To get to those locations, we had to take the highway and freeway. Or at least, that would have been the fastest route. Instead, we often did what the Jeep Wrangler wants you to do: we found the alternate route, using old backroads, dirt tracks, and secondaries. With the Wrangler, the journey is what it’s all about.

There really isn’t any competition for the 2015 Jeep Wrangler Rubicon. We’ve driven some notable offroaders like the always-capable Nissan Frontier and the Toyota 4Runner Trail, of course, but those aren’t Jeeps and aren’t as purposeful as is the Wrangler.

Extremely capable off the road.

Probably delivers the most fun you can have out in the wilderness.

Definitely not an everday driver.

Everything about the 2015 Jeep Wrangler Rubicon Hard Rock is geared towards not only exploring unusual places, but exploring new ways to get to those places. This is a vehicle that loves side roads, dirt path shortcuts, etc. Those tracks getting to places that are way out there are called “Jeep trails” for a reason.

Test Period Length and Limitations
The Wrangler Rubicon was a manufacturer’s press loan for about four days in which time we put a total of 172 miles on the vehicle. This was in various terrain both on and off the road.