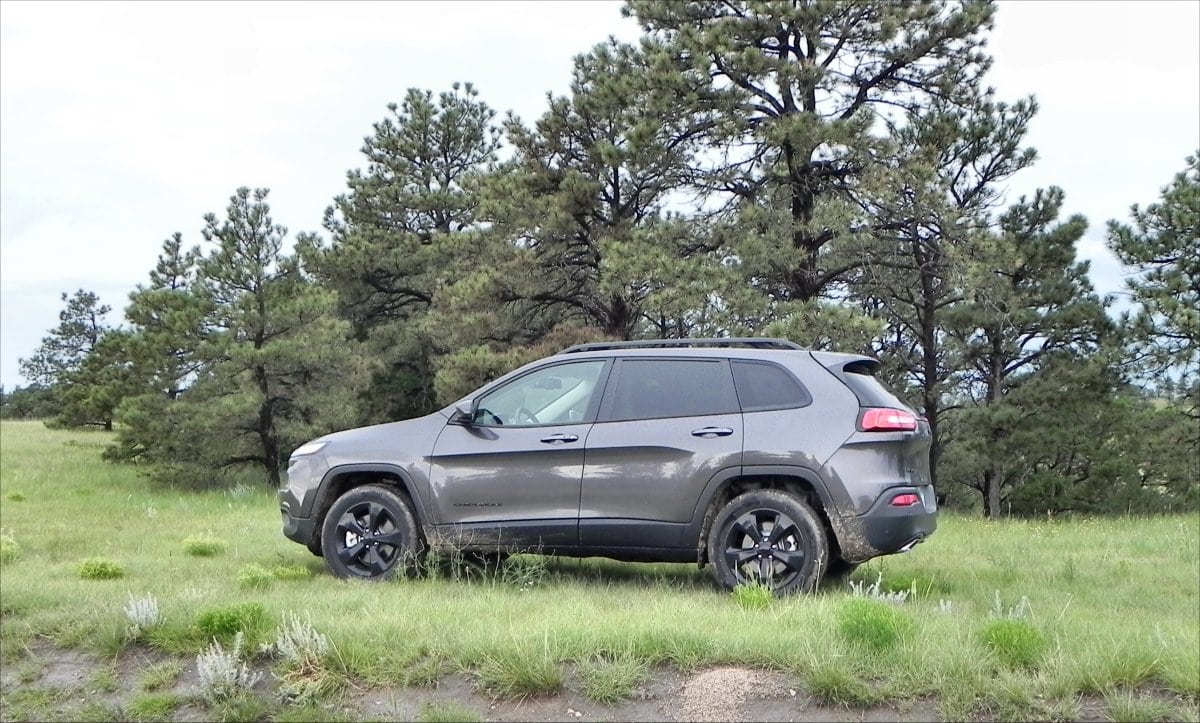 The Jeep Cherokee was a favorite last year and continues to be so for 2015, with a couple of additions that keep it a front-runner. Fuel economy sees a boost and some safety updates for a couple of trim levels add to an already compelling package. When we drove the Jeep Cherokee Trailhawk last year, we really enjoyed the Cherokee’s capability and interior comfort. A great family machine with a “get you anywhere” personality, the Cherokee is a compelling offer in the midsize sport utility segment.

For the new model year, the 2015 Jeep Cherokee sees the addition of an engine stop-start system to aid fuel economy while a couple of trim points receive a backup camera and automatic headlights as standard equipment. These build on the already great interior and excellent presence of the Cherokee.

Exterior of the 2015 Jeep Cherokee The outside of the 2015 Cherokee is polarizing to some, but the look is genuinely Jeep and has a strong, unmistakable presence. Initially, we didn’t like the look of the new Cherokee when it was introduced last year, but upon seeing one in person, we changed our mind and were hooked. The sharp front fascia, slotted grille, and absence of round headlights in exchange for slitted, peering lights is a big change for the SUV.

We like the strong body lines, the throwback trapezoidal wheel wells, and the sloped look to the roofline. It’s aggressive, yet refined and it looks very good. Our test model this time around was the polar opposite of the white Trailhawk we drove last year, being a sinister-looking rendition of the Latitude trim.

Interior of the 2015 Cherokee The bold look of the Jeep’s exterior is matched by the plush, modern refinement of the interior. Inside the 2015 Jeep Cherokee, you’ll find comfortable seating in all five positions, quality materials throughout, and a lot of technology options. We love Chrysler’s Uconnect infotainment system, of course, and the 8.4-inch touchscreen is one of the best in the business. Beyond that, however, the Cherokee has spacious passenger room and is one of the few compact crossover SUVs to have both sliding and reclining rear seating. Two things about the 2015 Cherokee’s interior are a bit of a downer, though. Up front, the driver and front passenger will have difficulty finding a spot for their phone, MP3 player, or other gadgets and the center armrest console cubby is large, but not huge. The other is the tilt-telescoping steering wheel’s limited range of movement, which might have some larger drivers feeling a bit uncomfortable.

Cargo space in the 2015 Cherokee is good, though nowhere near best-in-class. At 24.6 cubic feet, it falls behind some competitors, but is still ample for most uses. With the rear split-fold seats down, the cargo space in the Cherokee grows to almost 55 cubic feet. Our test model included optional netting, some well-positioned tie-down points, and a nifty adjustable side rail for hooking and hanging things.

Under the 2015 Jeep Cherokee’s Hood

The base engine for the Cherokee is a 2.4-liter four-cylinder that outputs 184 horsepower and 171 pound-feet of torque. This runs through a standard nine-speed automatic transmission. The EPA rates this engine at 25 mpg combined in front-wheel drive and 23 or 24 mpg combined either of the two four-wheel drive systems. We drove the Cherokee in its V6 option, which is a 3.2-liter producing 271 hp and 239 lb-ft. It utilizes the same nine-speed transmission and choice of front-wheel or four-wheel drive. The EPA rates this engine at 24 mpg combined in FWD and at 23 and 22 mpg combined with the 4WD options.

The 4WD options are Active Drive I and Active Drive II. The former is basically selectable all-wheel drive with basic off-pavement capability and all-weather stability. The driver has no other control over the system other than “on” or “off.” Active Drive II is more robust, offering terrain selection modes and much more capability off the road. Although not nearly as hardcore as, say, the Rubicon or other legendary Jeep models, the 2015 Cherokee with Active Drive II does well for itself as an SUV and can best all comers in its category for its offroad prowess.

On the Road in the 2015 Jeep Cherokee The Cherokee is remarkably refined for a true sport utility, with a comfortable, well-mannered feel on the road. We liked its road appeal, which is marked by a nicely cushioned ride and good driver input and response. Our only complaint on the road was the throttle’s occasional reluctance to downshift the transmission and speed up quickly on the highway.

As a family use vehicle, the Cherokee offers a lot of goodness. The back seat can accommodate full-sized adults well and is also easily adjustable for use with child safety seats and the accouterments that come with children. We liked having the ability pull the seats forward to allow easier reach from the front to hand snacks and such to the smaller occupants in back. Off the road, the Jeep Cherokee is more astute than might be expected. Although the Trailhawk model is definitely the off-pavement king in the Cherokee lineup, the Latitude with Active Drive II we tested this time around was still very, very good. Mudding and stream fording are easily within reach of this model, so those who like to adventure occasionally will find that the Cherokee, when properly equipped, is more than capable of doing so. Fisherman, hunters, and campers will love this rig.

This does not mean that the Cherokee is a more family-friendly Wrangler Rubicon, however. The 2015 Cherokee has limited clearance and capability by comparison. On the other hand, it’s more than enough for the majority of family outdoor excursions and is definitely more capable than most competitors.

There are several small crossovers on the market now, but the Jeep Cherokee may be the only one that can truly call itself an SUV. That said, consumers shopping in the segment may wish to look at the Ford Escape, Honda CR-V, and Mazda CX-5. The Toyota RAV4 is also an option here. None of these, however, can claim the offroad capability of a 4WD-equipped Cherokee.

We really enjoyed the 2015 Jeep Cherokee and believe it’s a great choice for those who need a double-duty machine for both daily family use and weekend brush tromping. It is capable of getting you to both the soccer field and the remote fishing stream. Nicely done, Jeep.

Test Period Length and Limitations
The Cherokee Latitude was a manufacturer’s press loan for about a week. During that time, 205 miles were put on the vehicle in various driving conditions both on and off the road.