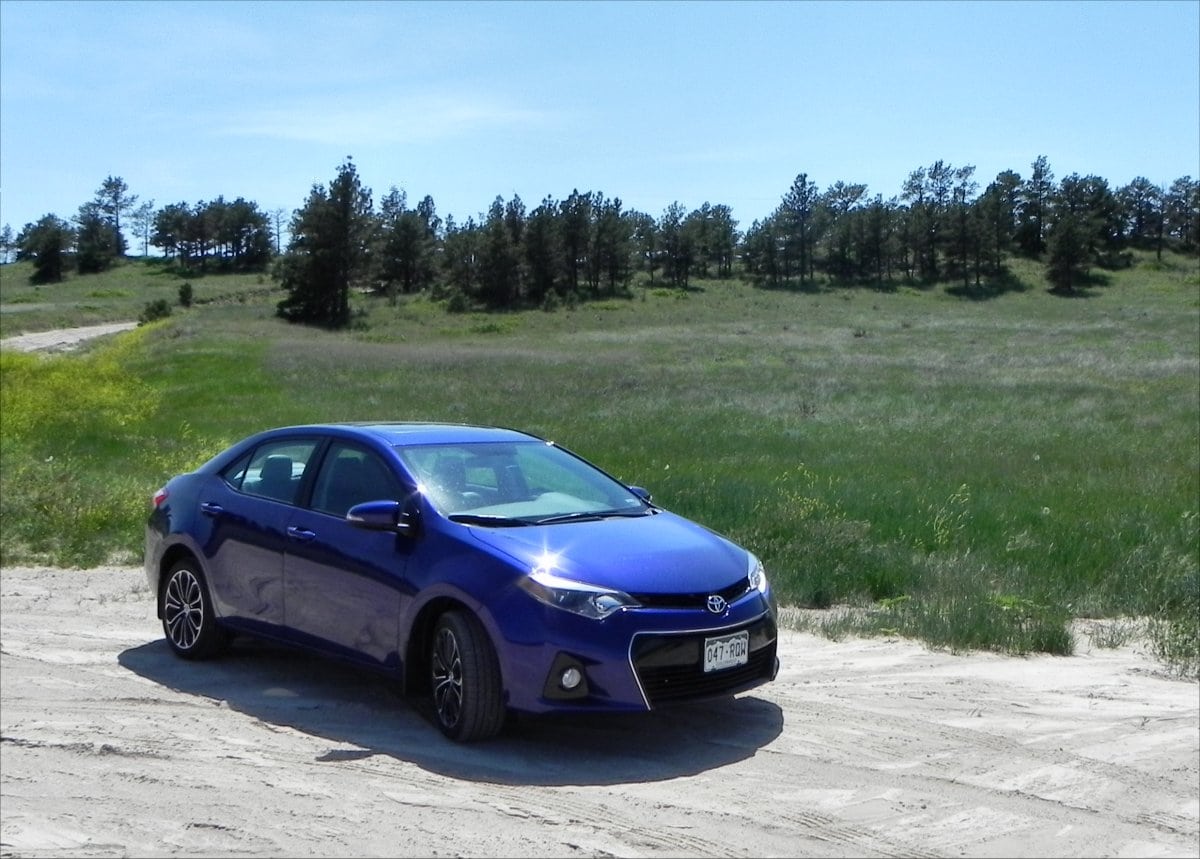 Some standard equipment is added to the Corolla for the 2015 model year, but it remains the same roomy compact sedan it was before. This means the downsides remain as well. When we drove the Corolla S Premium last year, it was in a blue metallic color. This year, when the 2015 Toyota Corolla arrived at our door, it was again in the S Premium package with Blue Crush Metallic paint. This meant that, on the exterior, little had changed for the Corolla from last year to this. Once inside, though, we did note a few differences.

Notable updates for this model year include a rear center armrest that folds down between the seats when the center position is not being used. This is now standard on all but the base model Corolla. Also added are last year’s Driver Convenience package for the Premium sub-trim as standard in the Premium now. This was a $1,500 option in 2014 and is now part of the base price for the Premium option in 2015. We do note that some of this is made up for in the price increase year-on-year, but it’s still a valuable addition with the SmartKey system and audio upgrades being the most useful updates it brings.

Exterior of the 2015 Corolla

On the outside, the Corolla is a compact sedan with a sportier look for this generation than it’s had in the past. This puts the current-generation Corolla more on par with its contemporaries in terms of exterior look. Strong curves and an aggressive front fascia dominate the Corolla now. With the Premium package, which we drove, additions such as a rear spoiler are included, while the S model we had also sports some premium-looking wheel options.

At its base, though, the 2015 Corolla is still a five-passenger compact sedan with fuel efficiency and daily driving as its focus. Through the five trim levels the Toyota has, the focus of the car changes from “Point A to B” functionality to more premium comfort and daily use, especially in the LE Eco and S trims. Plus and Premium sub-trims add more bling and goodies. All within budget, of course.

Inside the 2015 Toyota Corolla

The 2015 Corolla has a more upscale cabin, but is not nearly as premium in appeal and quality as some rivals may be. The Corolla has always been a budget car and while ergonomics and comfort are all in play here, cost is also important and that means some of the interior’s fittings are not as upscale as might be found elsewhere.

Things we mentioned last year about this car, including increased interior space, continue for this year as well.

“Seating is comfortable with a lot of new room added, especially in the back seats, thanks to the slightly larger body size in this new-generation Corolla. Packages like our S Premium add some better materials to the seats and more adjustment for the driver.” The trunk of the 2015 Toyota Corolla remains a selling point at 13 cubic feet with wide access and easy loading/unloading characteristics. The trunk of my 1984 Corolla back in the day was an important part of its appeal and that remains a focus for the car in 2015.

Another point of note is the touchscreen interface. This six-inch screen is bigger than that found on some of the competitor’s offerings and it comes as standard in all but the base model Corolla L. Graphics are clear and simple, though the backing camera may require some to squint to see detail. Features are good, though, especially in a car priced like the Corolla. An upgrade brings Entune Apps which allow smartphone integration beyond simple Bluetooth calls. Streaming music and the like becomes an option and our test model’s inclusion of this let us try it and find it relatively easy to use – provided the car is parked when you set it up and start the stream, of course.

The same 1.8-liter four-cylinder engine and continuously variable transmission (CVT) introduced last year powers the Corolla for 2015. This combination produces 132 horsepower and 128 pound-feet of torque, which should be plenty for a car this size. Re-tuning in the LE Eco model ups the horses by six points, but drops torque by two. A six-speed manual transmission is standard in the base L model and a four-speed automatic is its upgrade option. That six-speed manual can also be had in the S model, though we didn’t get to try it.

Given a choice, we’d prefer the less efficient automatic to the loud, often confused CVT. This transmission is noisy in the cabin, often hesitates, and requires high RPM to achieve and hold highway speeds over 55 mph. As a further note, its should be mentioned that the Corolla has cheaper and less efficient rear drum brakes on almost all of its packages (the S Plus and Premium add discs). This means braking is not as good as it could be and many rivals in the compact segment are disc-only at all trims.

Finally, safety is an important factor in the compact segment and ratings in the 2015 Corolla are good, but not excellent. It achieved a 5-Star rating from the National Highway Traffic Safety Administration, but only a second-worst score of “Marginal” on the small-frontal offset test and, perhaps more importantly, for its child safety seat latches from the Insurance Institute for Highway Safety.

There is little about the Toyota Corolla to make it “sporty” or “fun” in anyone’s terms. It does well for itself in most situations, especially around town. Acceleration is sluggish, but that’s par for the course in the compact budget class. The little 1.8L engine is a good size for this car, though it does struggle at highway speeds – especially over 55 mph. It had a rough time holding 80 mph, which is our freeway speed here in Wyoming. We do like the daily drive characteristics of the 2015 Corolla. It’s easy to control, relatively maneuverable, has generally good visibility, and does as well as can be expected in everyday use. Like most compacts, the Corolla doesn’t absorb the road well and has a tough time accelerating to pass, but is otherwise a good car.

Our chief complaint are interior noise levels and the struggling CVT at highway speeds. The fake shifting the CVT undergoes to give the impression of the car being “normal” is an annoyance rather than an asset; and, while other reviewers liked it, we found it a cheap trick and note that others in the business don’t need that to make their CVTs excellent.

The compact car class is full of good options for the budget buyer. We really like the Mazda3 for its sporty ride and excellent interior. The Honda Civic is the chief rival for the Corolla, of course, and has its high points as well. We also liked the simplistic, but workable Volkswagen Jetta and note the sportiness of the Ford Focus. The venerable Mitsubishi Lancer should also be included on a list of options here.

The 2015 Toyota Corolla continues the compact car’s quest for a perfect balance between budget pricing, good fuel economy, and decent value. It hits those marks pretty well and will probably continue its position as a top seller in the compact market. This despite its noisy CVT. For what it is, the 2015 Corolla is a solid little car that meets the needs of the everyday commuter and first-time buyer.

Test Period Length and Limitations
The Corolla was a manufacturer’s press loan, which we drove for about a week. A total of 169 miles were put on the car in mixed passenger loads and driving conditions.