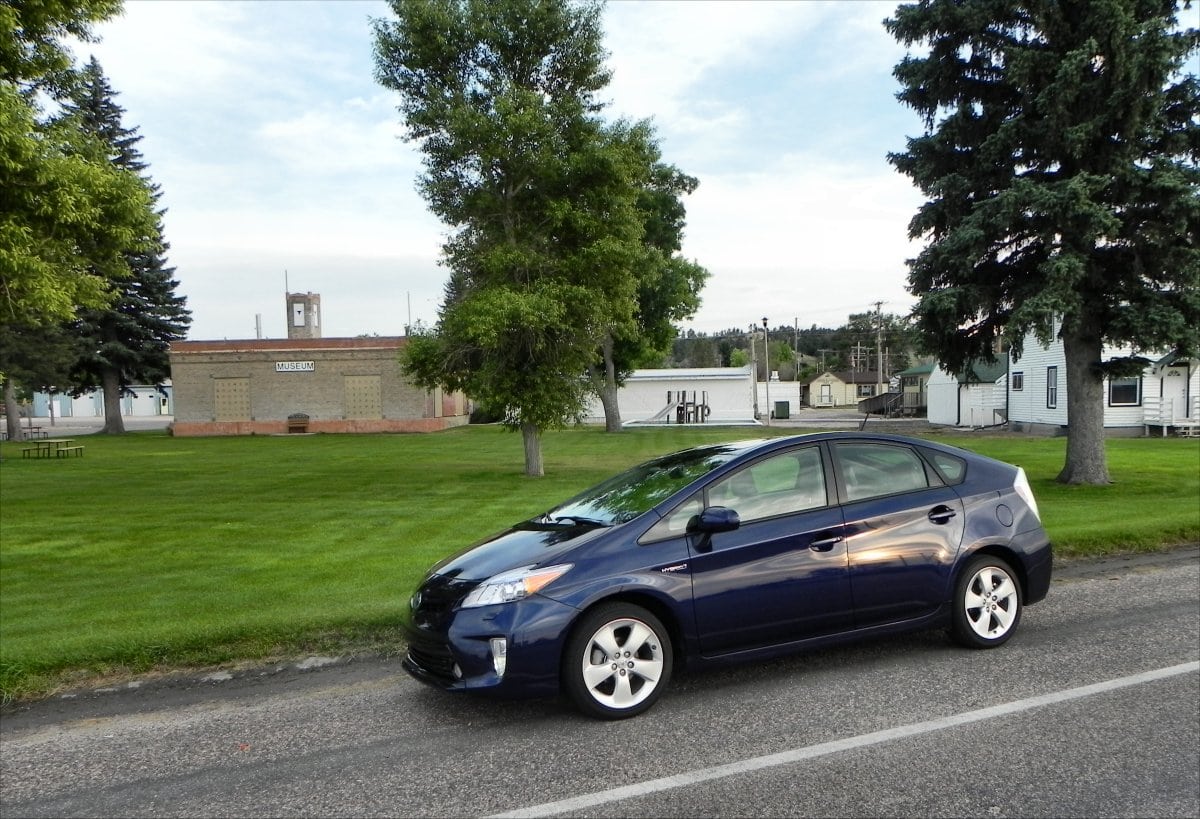 An all-new, next-generation Toyota Prius is on its way for 2016, but our drive of the 2015 Prius showed that it’s finishing out this current-generation for the car with a fuel-efficient whisper. The word “Prius” is not just the name of a car from Toyota, but it’s also become a colloquial synonym for “hybrid car.” When people describe a hybrid car, they invariably bring up or compare it to the Toyota Prius.

The first-generation Prius entered the market in 1999 after years of painstaking research by Toyota engineers. Toyota Chairman Takeshi Uchiyamada likes to tell the story of how his team couldn’t get the first Prius prototype to move for 49 days. Some might joke that little has changed since then, but we drove the 2015 Toyota Prius, the last of the third-generation for the hybrid hatchback, and we beg to differ.

This isn’t a race car, sexy sports sedan, or even a hot hatch. It’s a Prius. Most people are familiar with it. We drove a virtually identical version of our 2015 review car last year as a 2014 Prius model. Although little has changed between last year and this, the current-generation Prius is still a car that defines hybrid efficiency.

Hybrid Efficiency in the 2015 Prius

The 2015 Toyota Prius is EPA rated at 50 miles per gallon, combined. We got nearly that at about 47.5, but if you account for altitude and other factors (80 mph freeway speed limit, passenger loads), that’s pretty spot on.

A 1.8-liter four-cylinder engine and two electric motors with a battery pack make up the Hybrid Synergy Drive that powers the 2015 Prius. These output a total of 134 horsepower in front-wheel drive through a continuously variable transmission (CVT). One of those motors is the primary motivator while the other acts as a generator and starter.

In terms of performance, well, that combined MPG rating is all there is. Speed and handling are not the Prius’ forte. This is the hybrid that defined hybrids and is, we note, the reason many people associate hybrid cars with slow speeds. These attributes, however, are a big part of the reason the fuel economy numbers are so high for this car.

Inside the 2015 Toyota Prius Five Our test model was a top-trim Prius Five. This is the car with all of the fittings and they’re, well, good, but not stellar. The interior for the 2015 Prius is pretty basic compared to the rest of the midsize segment. The “floating console” design for the dashboard and the lack of a traditional instrument cluster – it’s all LCD and it’s front-and-center on the dash rather than at the steering column – are Prius hallmarks. That information display can seem kind of busy at times, since hovering your fingers over any of the steering-mounted buttons results in pop-up displays of those controls on that thin screen.

The other, more immediate concern in the 2015 Toyota Prius’ interior is its materials quality and driver comfort. There are a lot of hard plastics inside the Prius, even at this top trim, and they are not only unforgiving to look upon, but are also bereft of sound absorbing quality. This means you hear the road and wind. A lot. The Prius is very loud in comparison to anything similarly priced in the segment.

Seating in the 2015 Prius is good, but not stellar. The driver will find the seat is good enough, but not any better. Of particular note, especially to taller drivers who move their seat back for more legroom, is the limited range of the steering wheel telescope. Be prepared to lean forward or have a lot of bend in your knees. The front passenger is reasonably accommodated, however, and the rear seats are as would be expected in this segment.

Rear visibility is good, though it requires some getting used to with the “split window” effect of the rear hatch. The cabin is otherwise airy and well-done. We like the open hatchback design that allows for a feeling of more space to the rear. The 2015 Prius drives fairly well. It’s not sporty, peppy, or any of the other fun terms we automotive aficionados like to throw out when talking about cars. The Prius gets the job done. That’s all it’s ever been meant to do. The primary focus here is fuel economy.

In corners, around town, and when accelerating to get up the onramp and onto the freeway, the 2015 Prius will do the job, but don’t expect it to do it quickly. Efficiently? Yes, that’s kind of the point.

We do like the visibility and maneuverability that the Prius offers. The car is pretty nimble when getting around tight spaces or slotting into a tight parking spot. The suspension is fairly hard, though, and doesn’t absorb road changes well.

In all, the 2015 Toyota Prius is exactly what you’d expect from a Prius. It’s efficient, versatile, and a solid Point A to B car. If you’re looking for more than that, then the Prius isn’t for you. If you’re looking to commute to work or get to destinations without stopping for fuel all that often, then this is your car. It’s that simple.

Test Period Length and Limitations
The Prius was a manufacturer’s press loan for about a week.