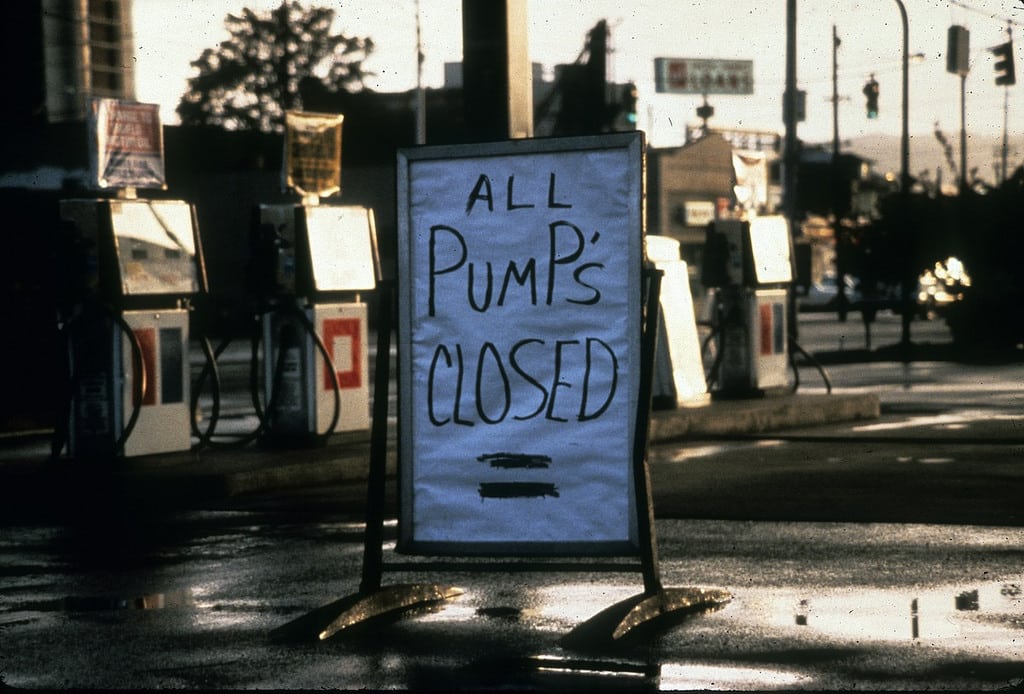 Having been a member of RMAP for several years, I’m very familiar with most of the group’s membership. We gather ever year for RMDE and always have a good time going over the newest vehicles, talking with our friends from automotive manufacturers, and getting a rare chance to personally interact with the people behind the scenes of automotive public relations and fleet management. This year was a great one as the weather cooperated, the turnout was good, and the vehicles on hand were well worth the trip. 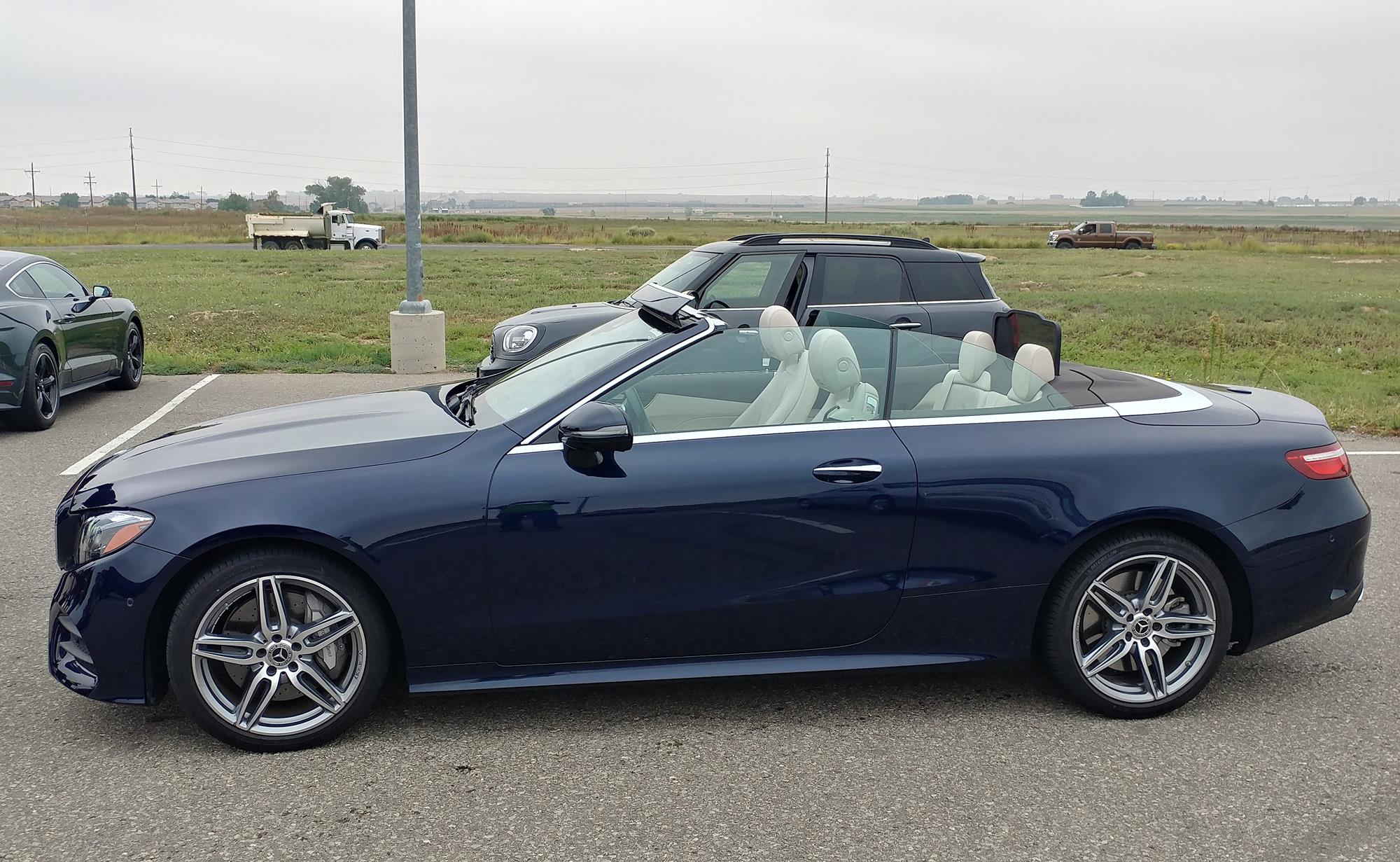 Our driving day began with the beautiful Mercedes-Benz E-Class cabriolet. A leisurely drive along the expressway, through a few farming communities, and up towards the mountains heading west showed us that this beautiful drop-top has a lot to offer. With lane-changing as part of its semi-autonomous capabilities and with air scarves blowing climate-controlled air across our necks, the chilly outside air didn’t bother and allowed us to take advantage of the convertible top.

Mercedes was originally planning to bring a Sprinter commercial van for us to drive. While we like that van, we’re happy that our day began with the beautiful E-Class instead. 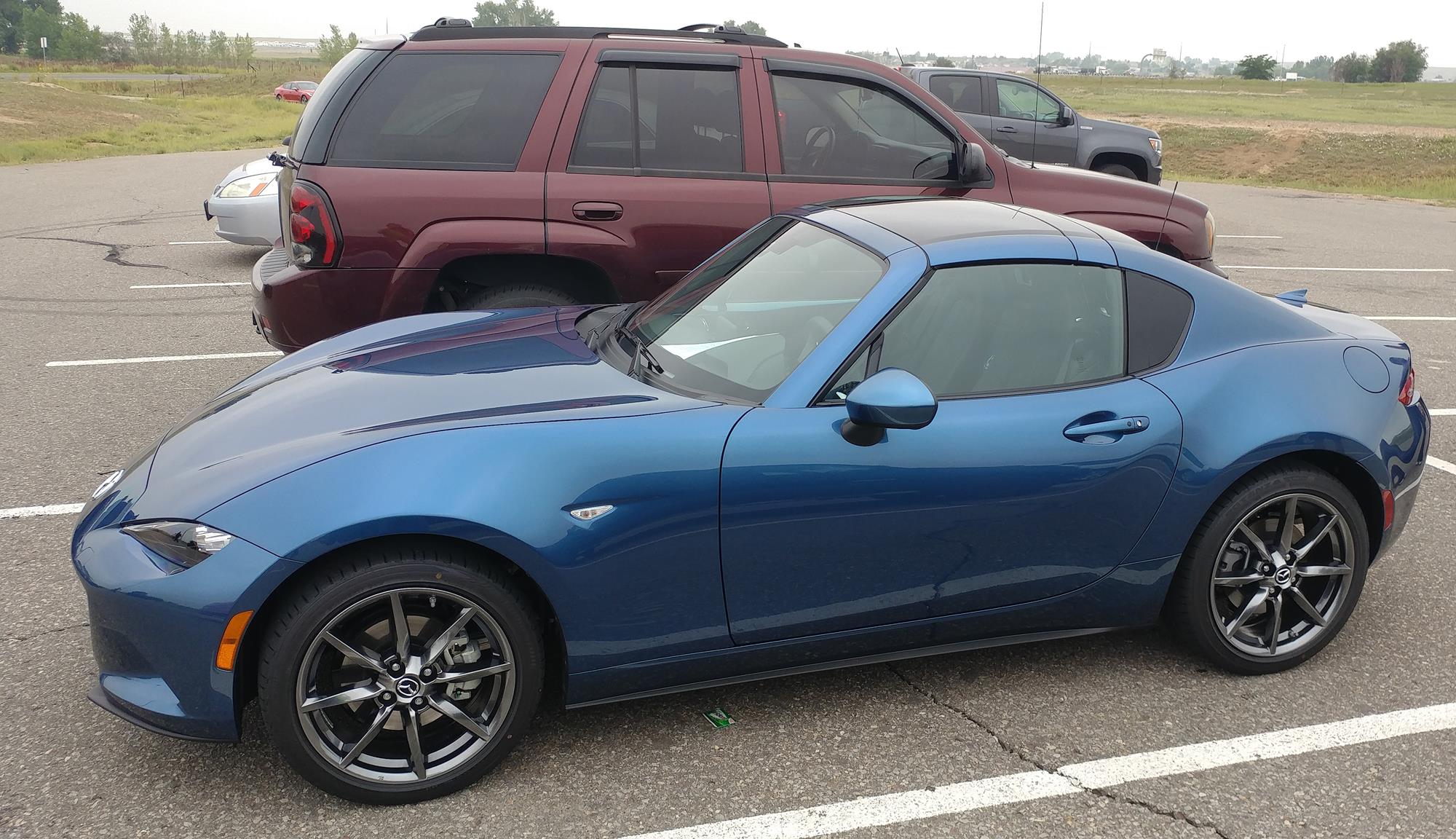 Our convertible lusts not yet sated, we swapped the E-Class for a much smaller, less expensive, but very fun little Mazda MX-5. The Miata, in its RS trim, has a bit more curb presence with a wider-appearing stance and stronger design. This is one of the tiniest of small cars, however, and getting my 6-foot 3-inch frame into the little MX-5 was largely about willpower and an inherent need to drive the car. It’s hard to pass up one of these cute little runabouts.

The MX-5’s manual transmission is well-done, as we’d expect from Mazda, and the spirited little car remains truly a driver’s treat. The goal of the Miata isn’t to wow with speed and power output, but instead to make every aspect of the driving experience a fun one. The MX-5 is and always will be a fun ride. 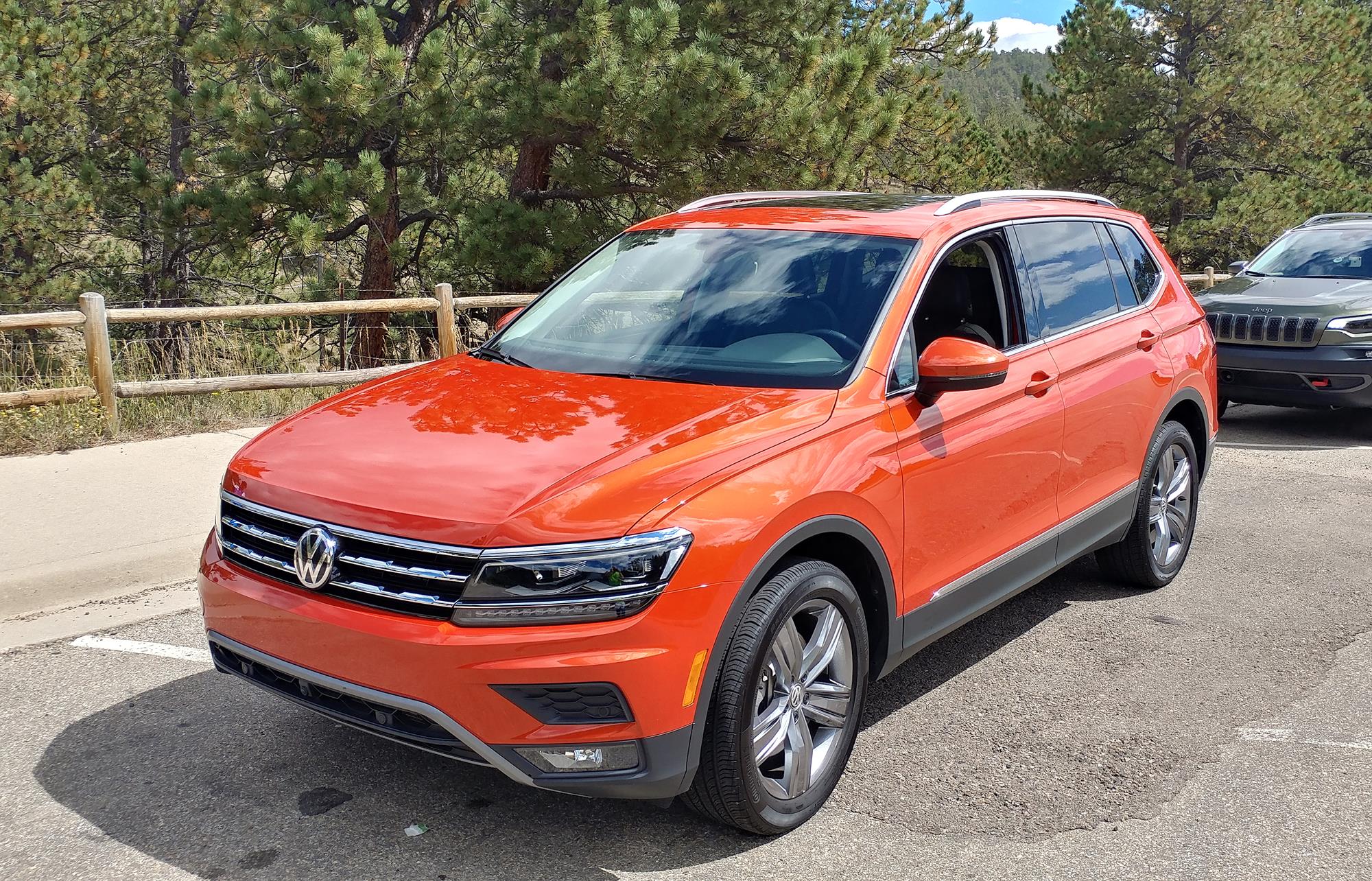 The Tiguan is an unusually good drive for the small crossover segment. It’s focus is on fun and the driver’s experience and that really shows when you’re behind the wheel. After the Miata, the Tiguan would seem like a let down, but it wasn’t. When we drove the Tiguan as a press loan earlier this year, we gave it an “A” for the many improvements to its new design this year.

In the canyon as we wound up the mountain towards Estes Park, Colorado, the Tiguan also showcased its good power delivery at altitude as it zipped up the highway. No complaints whatsoever. 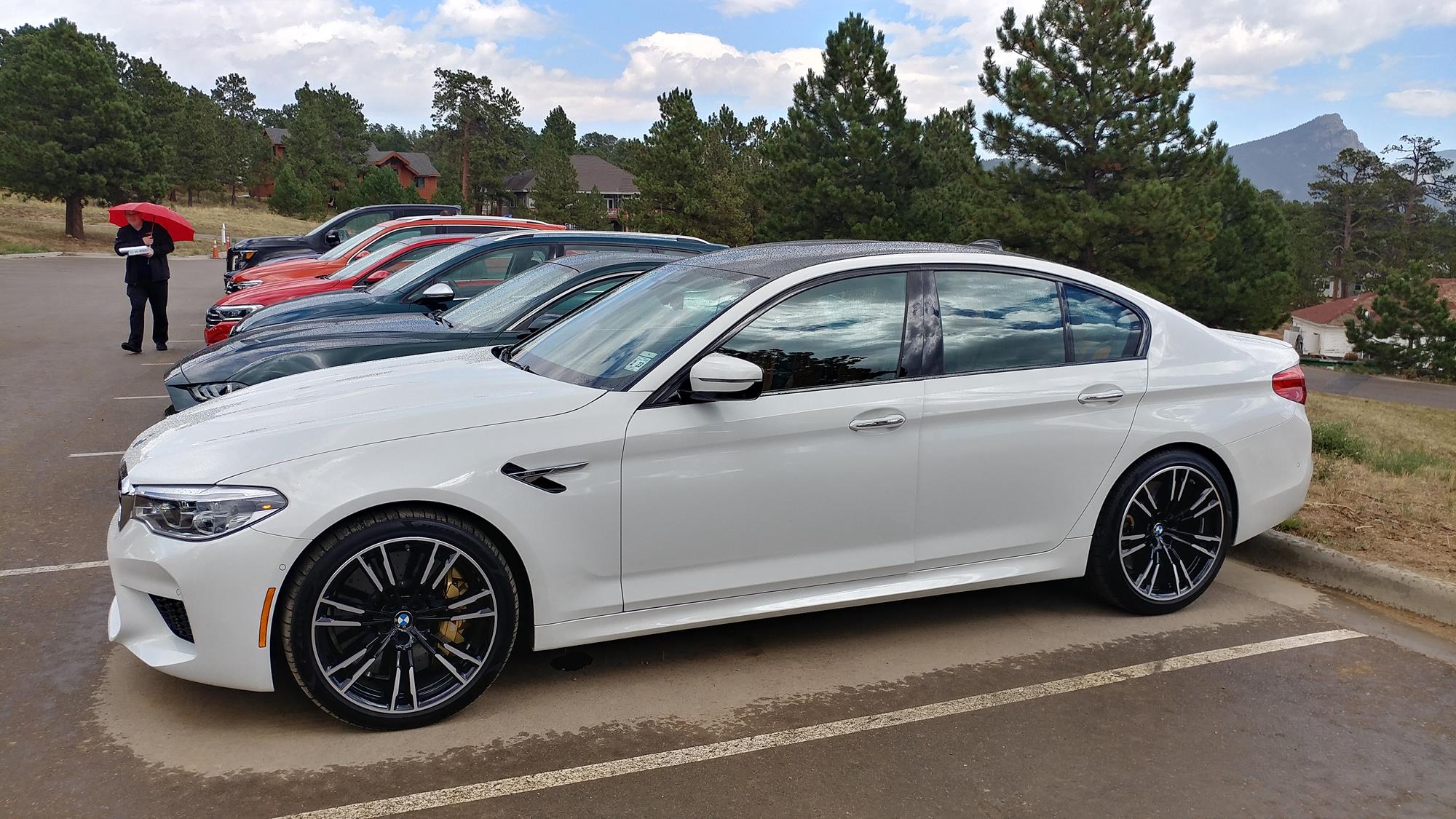 After lunch at the Stanley Hotel, courtesy of Ram Trucks, we piled into vehicles to head back down the mountain. Our vehicle to begin the return trip was the awespiring (just made that word up) BMW M5 sedan.

There are muscle cars, which make beautiful noises and growl their way forward while leaving skid marks and burst eardrums in their wake. Then there are muscular vehicles made purely for driving enjoyment and grace. That’s the M5. This beautiful car has the power of a muscle car and the aplomb of a European saloon. It’s a beautiful mixture of pure driving joy as only BMW could deliver it. 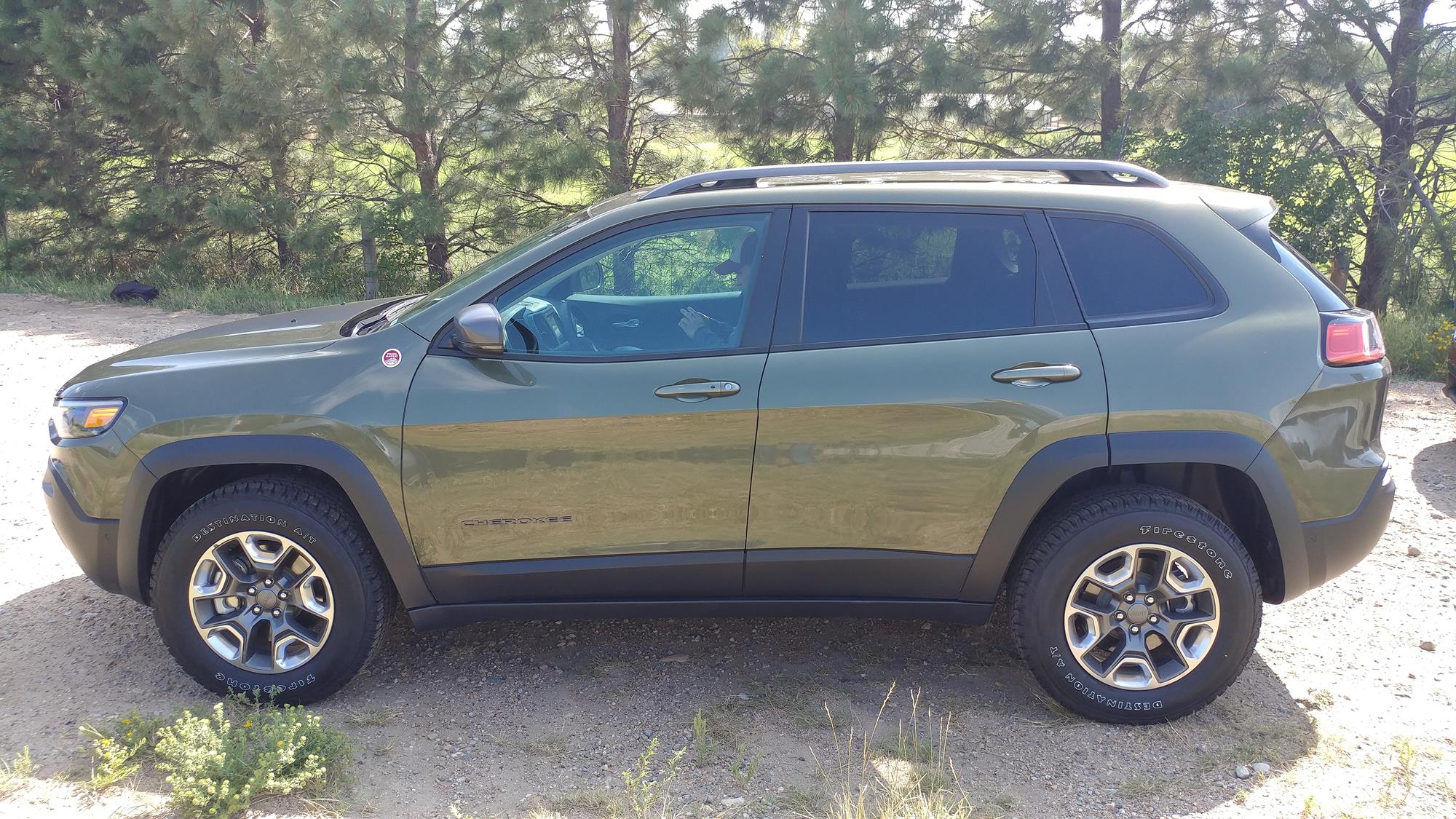 Since no mere car was going to stack up against the M5 very well, it was time to switch things up and get into something meatier. Enter the Jeep Cherokee. We drove the Cherokee earlier this year, doing a thorough check of its many new features now that it’s been completely updated to match the Jeep lineup. The off-road-centric Trackhawk edition did not change our minds about giving this excellent midsize crossover an “A” rating.

As we said in our review: “it’s all-new with the same awesomeness.” 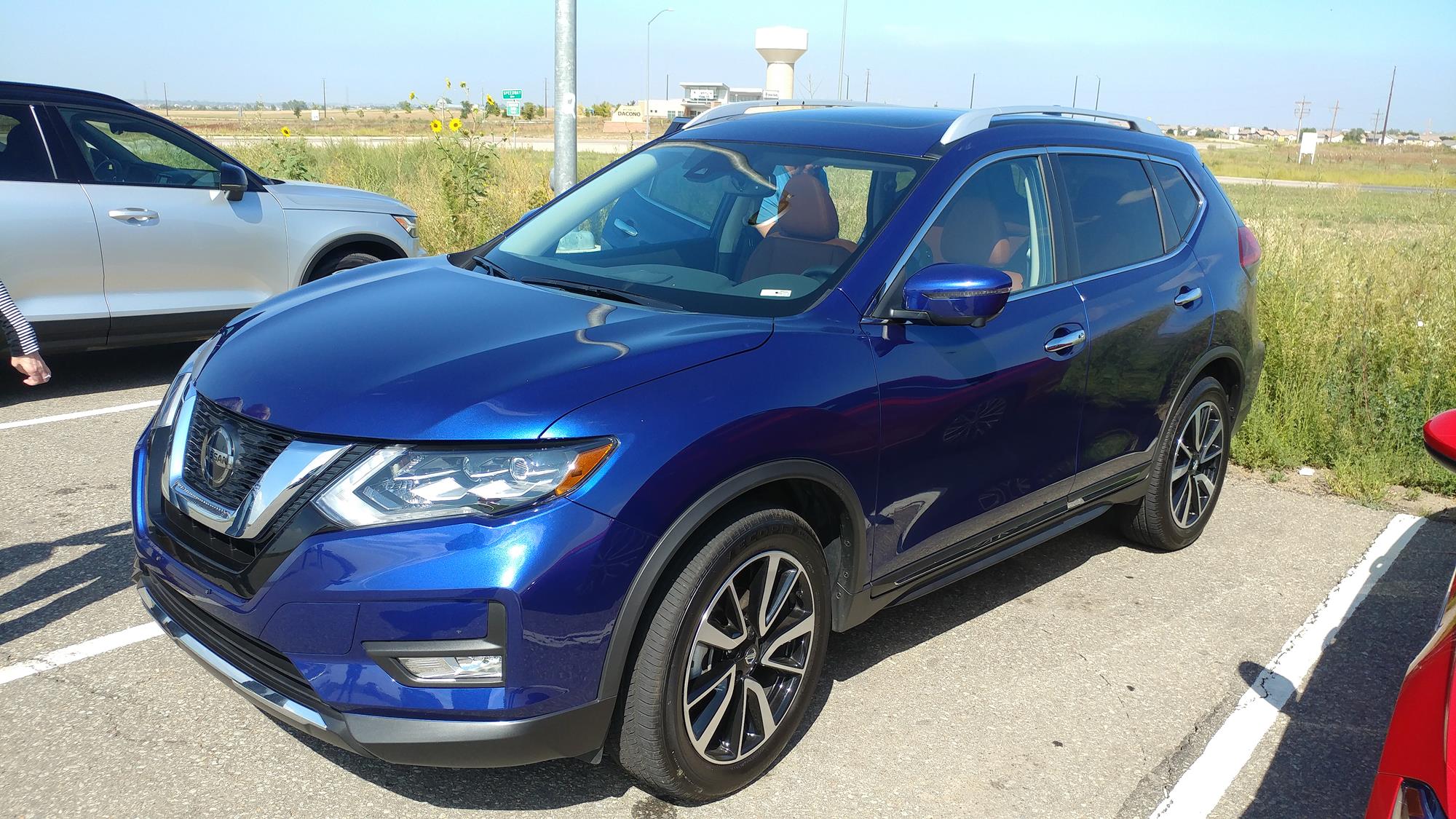 The Nissan Rogue is the company’s best-selling vehicle and there’s very good reason for that. The Rogue hits most of the marks a compact crossover buyer needs and adds in value and good design to go with that. When we drove it earlier this year, we loved it for its high consumer appeal. We also did a very thorough test of the new ProPilot Assist technologies available this year.

This time, we were going to drive it back to the Woolley’s hotel through afternoon traffic in Denver. A perfect chance to add one more metric to our tests of this closer-to-autonomy technology. In heavy traffic with lots of speed changes and lane movement as vehicles jostle for position in ever-crowding lanes, the Rogue’s ProPilot Assist system did very well. As we’d expected. 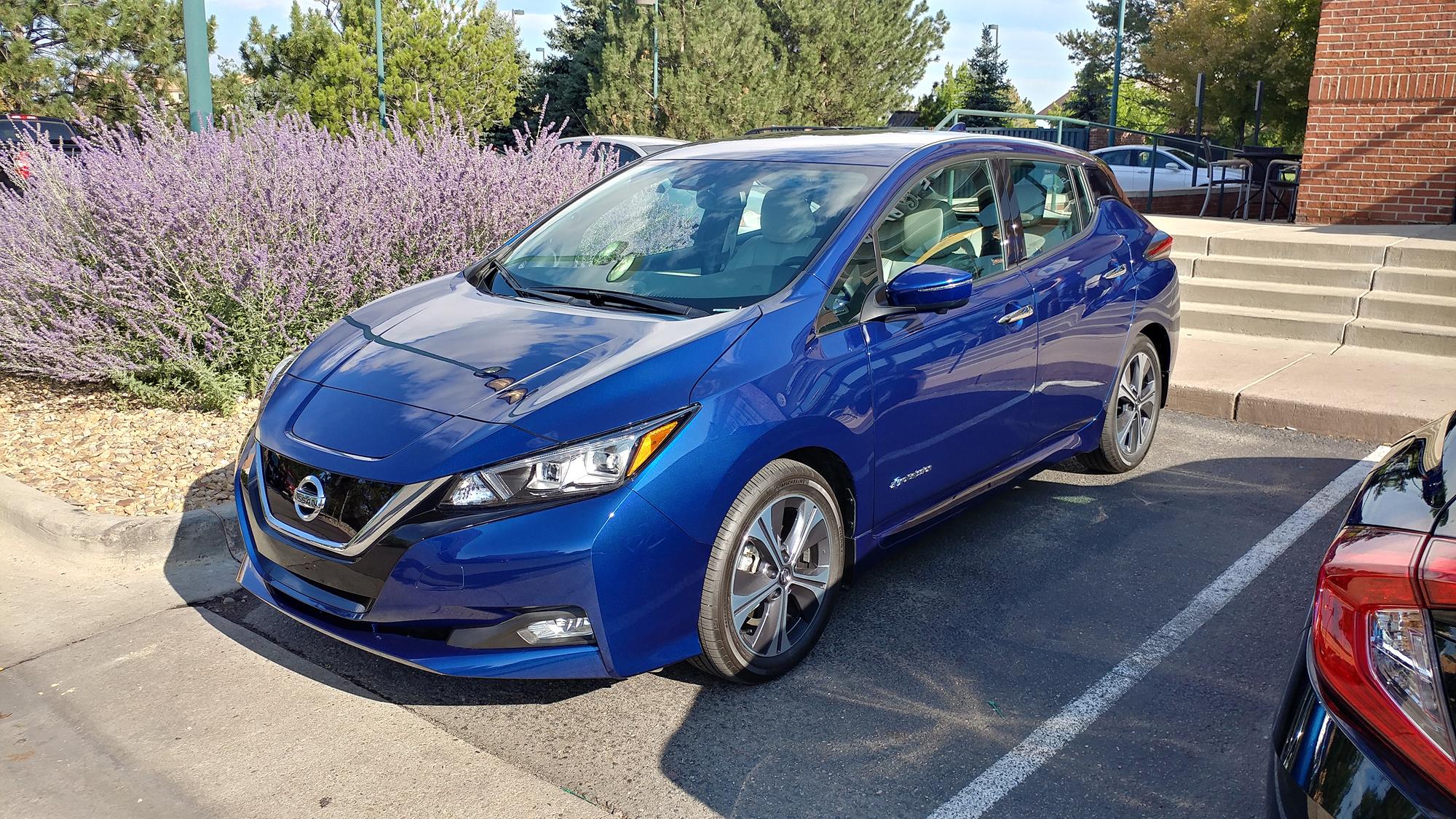 We stayed the night in Woolley’s and had dinner and drinks with friends from RMAP. The next morning, we went out to the parking lot to see what was there for the driving. The Nissan LEAF electric car immediately caught our eye and, freshly charged, it seemed a great choice for our morning coffee run.

Teaming up with fellow journalist Mia Voss and favorite Nissan representative Wendy Payne, we jumped into the LEAF and headed down the street for some morning java and bagels. Then we tooled around the area for a while, in silent electric propulsion, and talked about the car and its new design. 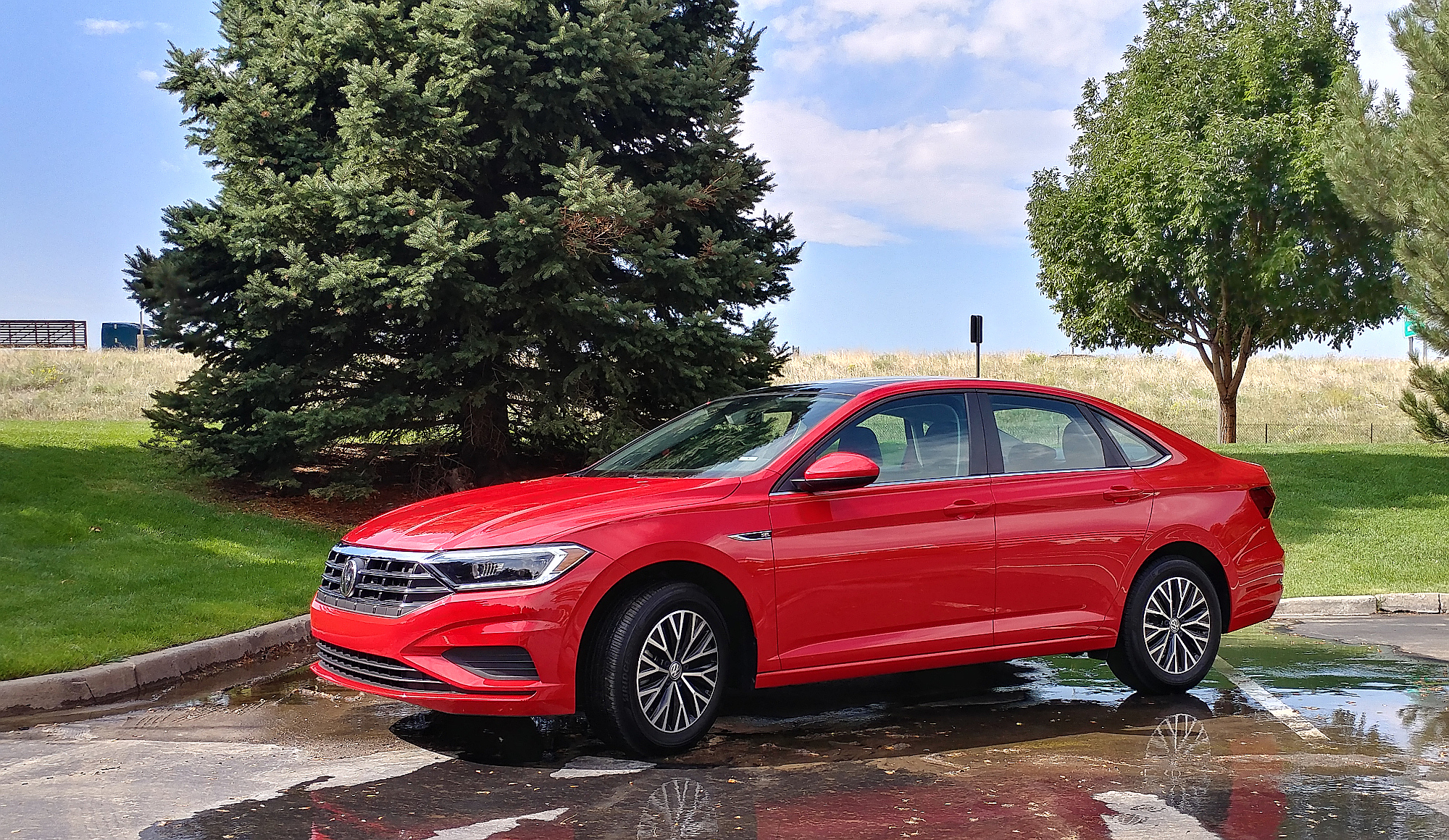 For the RMDE event, Volkswagen brought its all-new 2019 Jetta. We drove this earlier in the year as a press loan, but failed to get good photos of the vehicle because we’re slackers. This was our chance to quickly get re-acquainted and snap some good photos for use when we review the car (coming soon).

The Jetta has been redesigned to be more useful as a daily drive, to improve its on-road appeal, and to add more space inside. VW hit all marks and the Jetta is a good vehicle for the midsize sedan class.

Next up was the all-new Jeep Wrangler. This iconic vehicle has long been a favorite of ours and in this new design, it’s only gotten better. The new Wrangler was introduced in Los Angeles late last year and immediately got noticed. Now Jeep has announced a plug-in hybrid is coming and we’re even more excited about that possibility.

Our drive was short, but fun as the well-vetted V6 in this Wrangler pulled us along through suburbia so we could find a little dirt patch to play in. Good times with the top off! 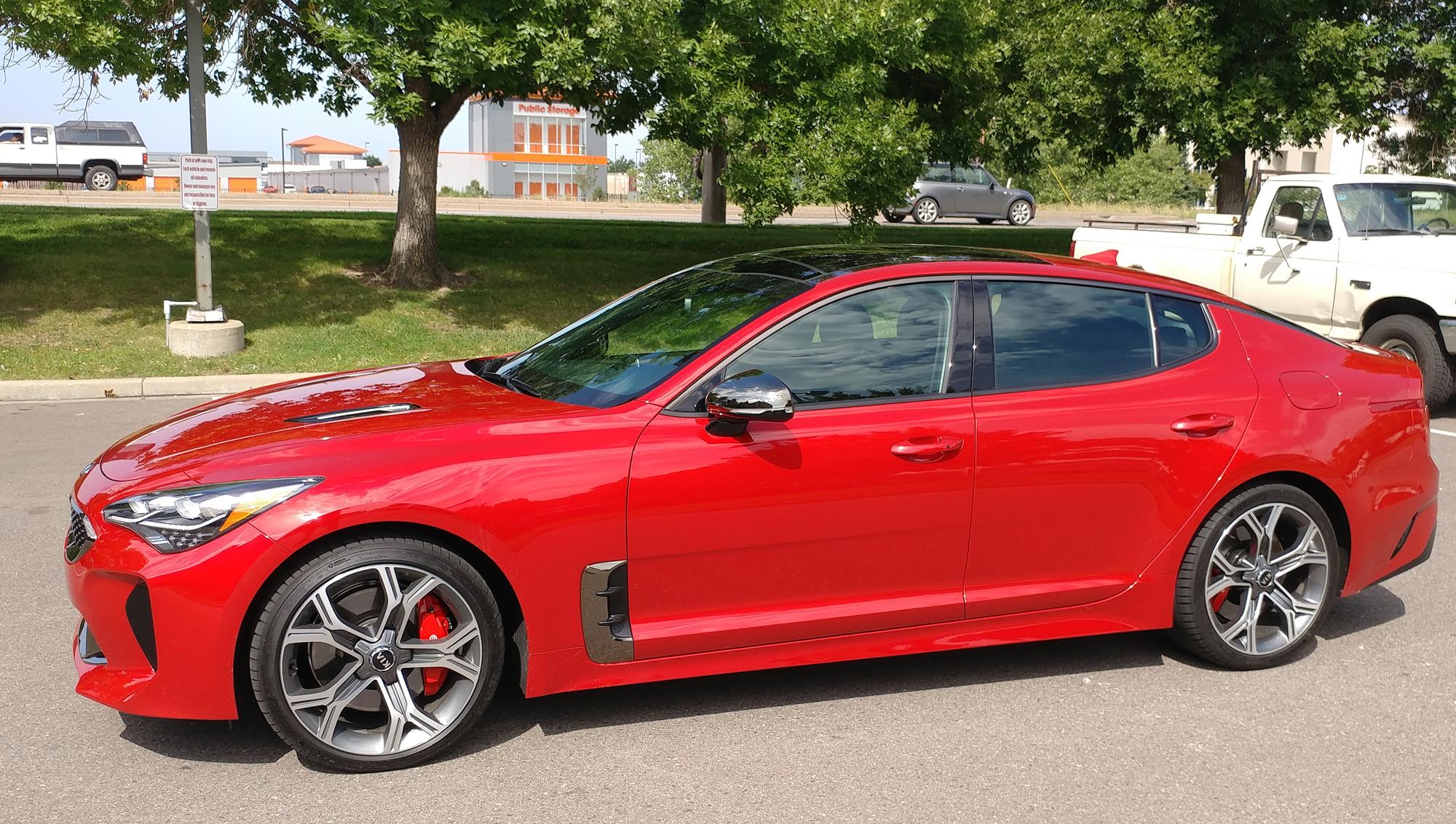 The Stinger has been a sort of unicorn for me, as I’ve seen it several times but never gotten behind the wheel or had it as a press loan. This was my chance to find out what this car was all about. This is Kia’s first real sports car and it’s very well done.

The Stinger has a sort of persona about it that’s part sports sedan, part glitzy “ooo-aaa,” and part midlife crisis. Everything about the car fits well, though, and hits an intended market of buyers who’ve got money to spend and expectations to be filled. This isn’t an over-fast or dangerous sports car, it’s a more refined, mannered speedster with practical fun as its primary focus. We like it. 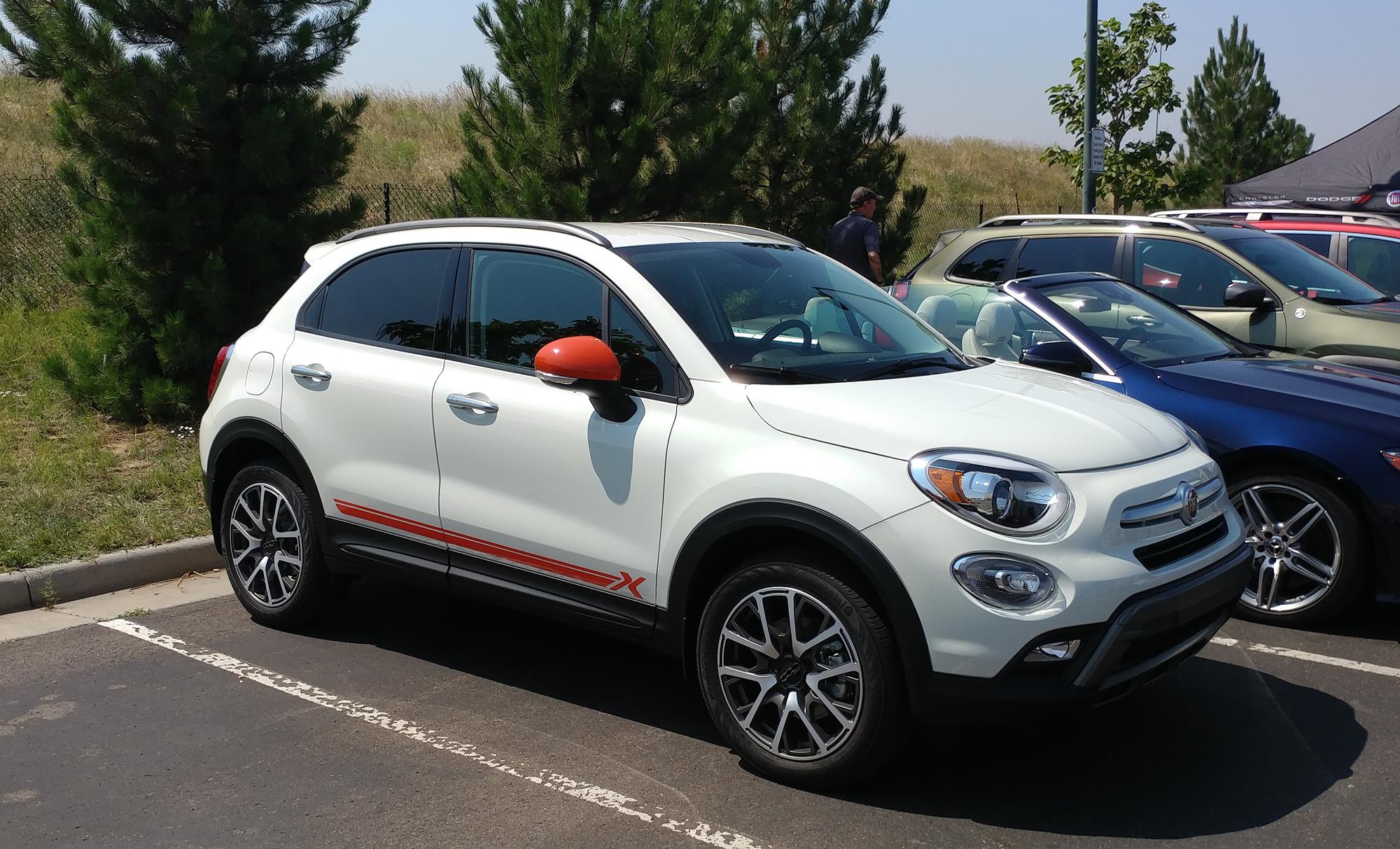 Because someone brought it, we had to drive the cute little Fiat in the lot. The 500X is based on the same platform as the Jeep Renegade and that shows. As a more upscale, sophisticated option for the compact crossover buyer, the 500X has a high ride height, good visibility, and a cute Fiat look going for it. We’ve driven the Fiat 500X before, of course, but enjoyed doing so again.

The 500X is a great city drive, with punchy off-line performance and good maneuverability. In Denver, that’s a great mixture to have. 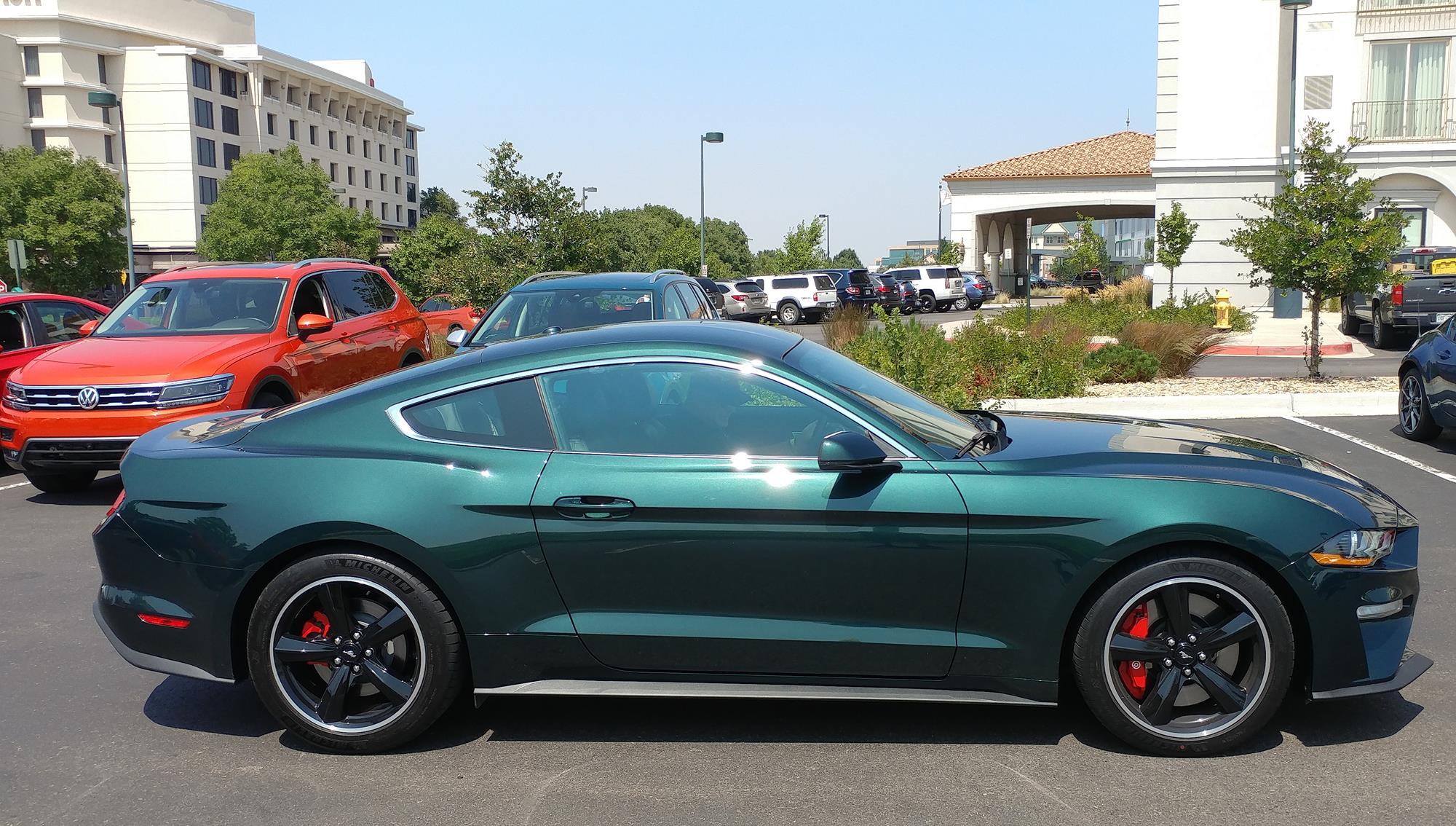 To finish our day, we saved dessert for last. One of the most anticipated drives of the event was the new Ford Mustang Bullit. This special edition of the Mustang GT is made in tribute to the 50th anniversary of the classic movie its name comes from. Complete with the beautiful green metallic paint of the original, cue ball shifter knob, and rumbling pipes of Steve McQueen’s ride, the Bullit is a dream car for many.

We took it easy with the car, given the area we were driving in, but found roadways and on-ramps to open it up and listen to the beautiful rumble as the Mustang Bullit turned those rear tires for more and more speed. This is what nostalgic Americana is all about and Ford hit the nail squarely on the head with the Bullit. 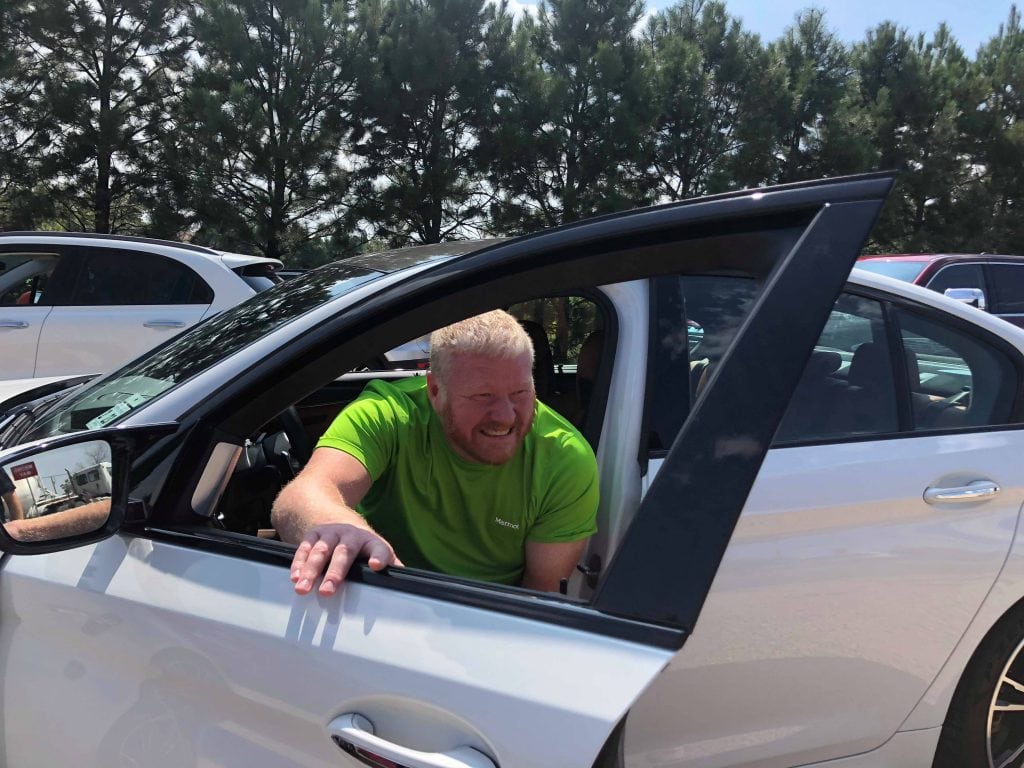 After our drives were finished and the afternoon had begun to wane, we had to leave the fun of the 2018 Rocky Mountain Driving Experience. Having been on boards and committees in the past, organizing this event, I was very thankful to those who stepped up for this year’s event to make it happen. The Rocky Mountain Automotive Press’ board members and RMDE committee deserve lots of praise for an event well done.

Looking forward to next year!