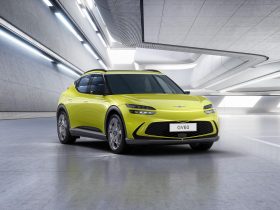 Bright EB 110 LM Blue contrasted with Dark Blue carbon, together with matte gold metallic wheel rims – the choice of colors used for the Bugatti Divo1 is as unique as the vehicle itself. The last of only 40 units is now leaving the Atelier in Molsheim, meaning another milestone has been reached in the more than 110-year history of the French luxury brand.

This brings to an end the three-year development and production period of Bugatti’s first coachbuilding project in the 21st century. Shortly after Stephan Winkelmann became President of Bugatti, he had the idea of reviving a successful Bugatti tradition. “I read a lot about it, took a look at the iconic bodyworks produced in the 1920s and 1930s, and began to wonder whether we could transpose this excellent asset to the company’s modern era,” Winkelmann recalls. After speaking to customers and dealerships, it soon became clear that Bugatti would be hitting precisely the right note with this exercise.

Soon after, the Bugatti designers and engineers were working on the new model and the Divo was then unveiled to select Chiron2 customers in discreet one-to-one meetings in spring 2018. “Upon seeing the Divo for the first time, the feedback from every single customer was extremely positive,” recalls Hendrik Malinowski, Director of Sales and Operations. “The 40 vehicles had all been sold within a matter of weeks following the first customer appointment,” says Malinowski – in other words, long before the Divo was publicly unveiled to a global audience at the Concours d’Elegance in Pebble Beach in 2018. At a base price of five million euros, the Divo was Bugatti’s most expensive model at that time.

The French brand based in Alsace has a long history of coachbuilding. It began with the company founder Ettore Bugatti in the early 1920s. He wanted his vehicles to be not only technically perfect, but also aesthetically flawless. Whereas Ettore adhered to traditional shapes, his son Jean created true masterpieces. He drew inspiration not only from automotive engineering, but also from the art forms which were dominant at that time, namely art deco, expressionism, and Dadaism. It wasn’t long before Bugattis were in demand not only because of their racing successes, agility, and driving comfort, but also due to their unusual and elegant bodywork shapes. With its Type 57 in various coachbuilding versions like the Galibier, the Atalante, and the SC Atlantic, Bugatti created iconic designs that would stand the test of time.

These days, Bugatti takes its coachbuilding one step further. Whereas various bodywork shapes were once merely tailored around a single chassis with the technology remaining unchanged, the further development and modification of technical components in the modern-day one-off and few-off projects result in entirely new vehicles that boast their own driving behavior. “As well as unique design, customers who buy a coachbuilt model enjoy a new, individual driving experience,” explains Pierre Rommelfanger, Head of Overall Vehicle Development at Bugatti. “Each small series undergoes the same degree of development as would a larger production run.”

The owner of the last Divo now being delivered demonstrates a keen sense of tradition – the primary color Bugatti EB 110 LM Blue is reminiscent of Bugatti’s last official Le Mans factory race car, while the contrasting Blue Carbon underscores the exclusivity and forges a link to the modern age. In the interior, the colors French Racing Blue and Deep Blue as well as matte gray carbon elements combine history with the present day.

The Bugatti Divo represents a milestone in Bugatti’s more than 110-year history that is rich with extraordinary vehicles. With its new design, it is visually and technically very different from the Chiron and has a flatter and sportier appearance thanks to its more streamlined lateral line, additional air intakes, and the new LED headlamps with boomerang daytime running lights. The rear is dominated by a complex 3D rear light as part of the rear grille, while a raised diffuser boosts the wideness effect at the rear. Bugatti composed the chassis and the handling characteristics more in the direction of agility and cornering dynamics, thereby giving the Divo its very own, special character. It is propelled by an iconic 8.0-liter W16 engine with 1,500 PS which is supplied with air by the striking NACA duct air intake with a central fin on the roof.

The model is named for the French race car driver Albert Divo, who scored a series of race victories for Bugatti over a 20-year period, including in six Grand Prix races and twice in the Targa Florio. In honor of him and headquarters in Molsheim, the French flag adorns the Divo’s left and right front fenders.

None of the 40 Divos built are identical. Many of the Divo customers opted for one-off production, choosing the colors and materials themselves such as the paintwork, leather, and stitching. They contribute their own design ideas and create their very own, personal vehicle in the process. As a result, the Divo is totally bespoke, entirely in keeping with Bugatti’s coachbuilding tradition.