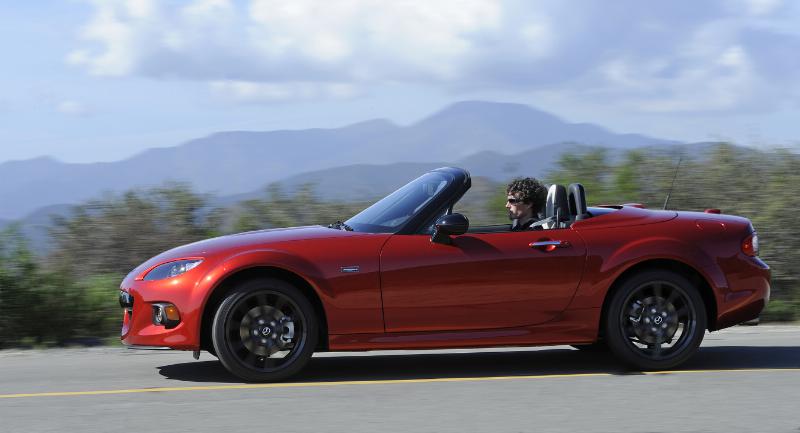 Mazda has unveiled the new Miata 25th Anniversary Edition at the New York International Auto Show as a global announcement of this limited-edition MX-5 built as a tribute to the world’s best-selling roadster. Only 100 of these special edition Miatas will come to the U.S.

“The original concept behind the MX-5 was so simple: to offer the pure joy of a lightweight sports car that moves precisely as the driver intends,” said Takashi Yamanouchi, chairman of the board, Mazda Motor Corporation.  “While responding to increasing safety and environmental requirements, in the 25 years since its launch we have had to continually reinvent the MX-5 – far beyond a simple evolution – in order to stay true to that original ideal.  The history of the MX-5 is one of changing everything in order to stay the same, a history of innovating in order to preserve.” When the Miata first appeared, it was as a showcase at the 1989 Chicago Auto Show. Inspired by the British roadsters of the 1960s, it was met with enthusiasm by those who viewed it. Many had longed for the return of the lightweight roadster that was a sports car emphasizing the drive rather than engine power. Mazda had hit on something genuine and it resonated, resulting in a quarter century of enthusiasts and the best-selling roadster of all time.

Built as  a lightweight and compact open-top two-seater with a front mid-ship engine on a rear-wheel-drive platform, it sported a nearly 50:50 front-rear ratio weight distribution and a low yaw inertia moment. For many, the MX-5 was a driver’s dream.  The entry MSRP of only $13,8001 insured its success.

The 2015 MX-5 Miata 25th Anniversary Edition goes on sale later this spring and Mazda is accepting pre-orders with a strict 100 car limit for the U.S.

Here is a gallery of the car from the New York show: