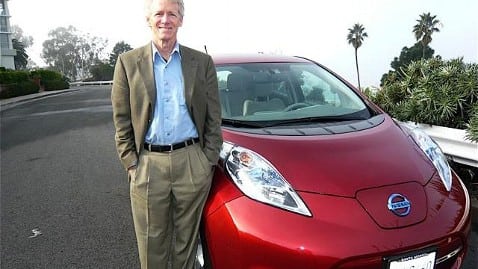 The 100th running of the 2022 Pikes Peak International Hill Climb on June 26 will mark the fourth year ENEOS has supported the race efforts of Evasive Motorsports and driver Daijiro Yoshihara.

ENEOS is Japan’s largest oil company and supplier of motor oil and transmission fluids to the majority of Asian vehicle manufacturers. Through its relationship with the car makers, it introduced an EV Fluid Series last year, which is designed to optimize the efficiency and performance of electric vehicles. And while it might appear unusual for an oil company established in 1888 to compete in the “Race to the Clouds” with a Tesla, it reflects the transition the company is making as transportation evolves.

TESLA MODEL 3
In 2019 and 2020, Evasive Motorsports entered an ENEOS-supported 900-horsepower turbocharged Toyota 86 in the Pikes Peak International Hill Climb (PPIHC), which won the Unlimited Class at the second time of asking. However, the team made a radical shift in 2021, abandoning its proven race winner for a Tesla Model 3 Performance.

Mike Chang at Evasive Motorsports in Cerritos, CA could see the market changing and knew it was time to embrace the future. But for a racing team and vehicle preparation specialist like Evasive, the Tesla Model 3 presented a number of challenges. In the past, a modified Toyota 2JZ turbo engine allowed them to compensate for the reduced air pressure on the climb to the 14,115ft finish line at the Pikes Peak hill climb. Unable to modify the electric motors in the Turn 14 Distribution / Yokohama Tire / ENEOS / Evasive Motorsports Tesla Model 3 Pikes Peak race car, the team needed to make other changes to prepare for the 12.42-mile sprint, which climbs 4724 feet. With the “Race to the Clouds” incorporating 156 turns, emphasis was placed on the chassis to maintain speed through the corners.

New for 2022 are Yokohama slick racing tires. Fitted to prototype 18” Titan wheels, they have EVS discs on the rear to aid cooling for the Brembo Pista brakes. The suspension utilizes advanced KW coilover dampers that allow significant adjustment in compression, rebound and ride height to ensure the tires remain in contact with the road.

Sourcing parts for the car was a challenge as very few people have attempted to race the Model 3, yet Evasive was able to find or fabricate new suspension arms, spherical links and joints as well as a new front sway bar. Full details are in the specifications below.

Another important aspect was air management, both in terms of aerodynamic downforce and battery cooling. Among the most notable additions are the wider, carbon fiber Artisan Spirits fenders, which accommodate the slick tires and allow a wider track for stability. The Voltex rear wing on the tailgate is also tough to miss; increasing downforce over the rear wheels and working in harmony with the Evasive carbon fiber front splitter and rear diffuser.

In addition to the vented hood and large duct in the front bumper, cooling has been addressed with rear inlet ducts, a CSF radiator and oil cooler, a NO2 (nitrogen dioxide) sprayer that’s triggered when a preset temperature is reached. For 2022, an EVS Tuning Dual Chiller has been added to keep everything running at the optimum level.

“Our first attempt at Pikes Peak with the Tesla in 2021 ended prematurely with a technical problem we were unable to trigger in testing,” Mike Chang from Evasive Motorsports explained. “It’s very difficult to replicate the conditions and load on the vehicle during testing, especially with a new car that presented us with a steep learning curve. However, we’ve worked continuously to address all the areas we can improve and have got a much better understanding of the Tesla Model 3’s strengths and weaknesses. We’re confident the car will be a genuine contender in this year’s Exhibition Class.”

In the absence of a dedicated competition class for electric vehicles at PPIHC, the Tesla and other EVs currently compete together in the Exhibition Class.

ENEOS EV TECHNOLOGY
For its part, the engineers and chemists at ENEOS sees the 2022 PPIHC as an opportunity to prove and promote its new EV Fluid Series. The line of dedicated EV fluids has been developed by the same experts who work alongside the majority of leading car makers in Japan and Asia. Currently, ENEOS personnel are working directly with the vehicle manufacturers to create the latest lubricants, continuously improving vehicle efficiency through reduced friction, lower emissions, improved fuel consumption and greater durability. And as the future of automotive development looks towards electric vehicles, ENEOS tasked its development teams to look at alternative fuel vehicle concepts, particularly in terms of lubrication and cooling. The new ENEOS EV Fluid Series is designed specifically to help the world’s EV manufacturers improve vehicle efficiency. It will also be offered in the future to help improve efficiency during routine maintenance, offering a superior alternative to current lubrication and cooling products.

The Turn 14 Distribution / Yokohama Tire / ENEOS / Evasive Motorsports Tesla Model 3 Pikes Peak race car is a partner in the development of the new ENEOS EV Fluid Series. Its performance during testing and at the race itself will be closely monitored. Driven under the harshest conditions, the race car will allow the engineers to measure the improvements in terms of lower friction and improved cooling, leading to greater performance and durability on the arduous PPIHC.

“We’re excited to return to Pikes Peak with the Tesla Model 3,” said Keisuke Yokochi, Chief Marketing Officer for ENEOS USA. “We’re confident Evasive Motorsports has built an incredible race car and know Dai is among the top drivers in the world. Lubricated and cooled by our advanced EV Fluid Series, we’re sure the team has its best chance of winning its class and setting a new record for electric vehicles this year!”

DAI YOSHIHARA
Having a well prepared, competitive car with the best lubricants and cooling fluids is essential for success, but perhaps the most important element in the ENEOS assault on the 2022 PPIHC is the driver. And for the fourth year in succession, the man behind the wheel is Daijiro Yoshihara; one of the most skilled and adaptable pilots in the world.

Although he retired from the Formula DRIFT PRO Championship last year, the 2011 FD Champion was universally recognized as one of the most talented drivers in the series. He’s also a 2020 PPIHC class winner, Time Attack Champion, accomplished GT racer, driver instructor and much more.

After Dai has succeeded in every discipline he’s encountered, the Japanese driver will be venturing onto dirt to discover whether he can adapt to truck racing over the next 12 months. And ENEOS will be on his race suit and at his side as we continue to support him for a sixth year of competition.

The relationship between ENEOS and Dai goes back a long way. In fact, the Japanese teenager worked at an ENEOS gas station as he started to explore his automotive passion. So, it was only natural we’d come together to continue the journey.

The partnership between ENEOS and Dai will look very different in 2022. Rather than focusing on Formula DRIFT, the year’s activities are headlined by the “Race to the Clouds” at the wheel of the Turn 14 Distribution / Yokohama Tire / ENEOS / Evasive Motorsports Tesla Model 3 Pikes Peak. But that’s just the start.

ENEOS will also support Dai and Turn 14 Distribution in its Drift Ride Along program, which will allow fans to sit beside Dai as he demonstrates the savage art of drift in his 1000hp Subaru BRZ, which has been refreshed and rebuilt after its punishing competition career. Dai and the BRZ will be appearing at a number of major events throughout the year, and fans who follow ENEOS social media could be eligible to win a “Ride with Dai.”

Additionally, Dai will be making personal appearances in the ENEOS booth at various enthusiast events around the country. The program has already begun and fans should follow ENEOS social media for updates.

If you can’t attend in person, don’t worry because Dai is working on a number of exclusive ENEOS videos, which will show fans behind the scenes and keep up with his latest activities.

If that’s not enough, ENEOS and Dai are also working together on a SEMA project car, which will be a big departure from some of the incredible machines he’s built to date.

“I’m extremely grateful to have the continued support of ENEOS,” Dai told us. “Having worked from the company in Japan, they definitely feel like family at this point. And I’m especially grateful that they wanted to embark on this adventure as I explore new horizons beyond Formula DRIFT. It’s definitely going to be an exciting year and I can’t wait to share it with everybody!”