A record 12,000 electric miles around the U.S. with a Tesla Model S Few would have ever predicted the rise in demand for the Ferrari 308 GT4 after its humble beginning. The Ferrari 308 GT4 deserves its spot in the sunlight of collectors garages
as collectors finally realize its historical value. The 308 lineage changed the face of Ferrari, forever putting at the forefront of exotic cars.

Although eclipsed by its 308 GTB and GTS sisters, the 308 GT4 was an innovative Ferrari that was not as appreciated as it should have been when first introduced at the Paris Motor Show in November 1973. It was commonly thought of as replacing the unbeatable Dino 246 GT and was even badged as as one. Ferrari later replaced the Dino sticker with a Ferrrari badge in order to increase its sales in the U.S.. Although the Dino sticker was to differentiate the V12 and V8/6 engines, the 308 GT4 never received the interest it should have gotten. Nonetheless, the GT4 was an innovative Ferrari and marked a radical departure in the carmaker’s road philosophy.

Technically speaking, both GTB/S and GT4 were similar, but the GT4 managed to squeeze an extra two seats behind the driver and passenger. The 308 lineage was also the first production road Ferrari to receive mid-position V8 layout, something that would become the norm for the next few decades on V8 Ferraris. Although, it sported the same four Weber 40 DCNF carburetors found on the early 308 GTB and S, the car was different. The GT4 raised a lot of eyebrows when Ferrari decided to give Bertone the design of the production road car instead of Pininfarina. A quick look at the 308 GT4 and the difference between a GTB/S are obvious. The GT4 is a very angular car, which reflected the coach builder’s efforts it had started with the Lancia Delta, penned by Marcello Gandini. The trapezoid design was more than just an exercise in fantasy. For one thing, the driver had a good 360 view of the road, and as we can attest a comfortable and upright seating position. The 308 GT4 also had another quality the GTB/S didn’t have, it had a real trunk. Although the car was sold as a four-seater, the back seats were more practical for luggage, or children. Adults could ride in it, but anything over an hour would prove to be uncomfortable. It also had another plus, the engine had easy access, unlike the GTB/S, which made for faster and less costly maintenance. It was such an important project that Enzo Ferrari was involved with the design, taking a special interest in the steering, pedals and cockpit seating arrangements. In fact, even Niki Lauda was rumored to have helped set up the chassis.

The Ferrari 308 GT4 Is Not Exactly a GTB or GTS

Many assume the GT4 rests on the same frame and chassis as the GTB and GTS version, but it isn’t so. Bertone had to stretch the tubular spaceframe chassis that was originally based on the Dino 246 in order to fit the extra seats behind. The car rested on the same configuration as the 308 variants. Perhaps the most intriguing part was in 1975 when the GT4 received modifications, most prominently it now sported Ferrari Prancing Horse badges, dual paint scheme, US air conditioning fixes, bumper modification, and exhaust changes. The Dino 308 GT4 was the only Ferrari legally imported to the US that year. Unlike the GTB and GTS, the GT4 was the only 2+2 Ferrari officially raced with factory support, giving the car an added collectability edge over its more curvaceous sibling. The Ferrari 308 GT4 as a Collector’s Item

It is safe to say that when the Ferrari 308 GT4 was introduced, it didn’t inflame the hearts of aficionados who lamented the lack of the more potent V12. It’s a shame considering the innovative aspect of this car that shared its platform with the more exuberant 308 GTB/S. The 308 GT4 handled very well and had more space, while it marked a radical shift in Ferrari road cars. As we mention in our previous story on the 308 GTB and S, Enzo Ferrari only cared about racing, relegating road car as a way to finance its racing program.

The 308 GT4 stands out for many reasons. Enzo Ferrari himself was direct involved with the design of the car. It’s trapezoid wedge shape also made for a more discreet car, something Maserati had understood for a decade now. It appealed to a different segment of buyers Ferrari hadn’t tapped in yet who were flocking to Maserati. The amazing Nikki Lauda had tuned the chassis. It packed four seats, or enough to throw in your carry-on bags to escape to a cozy lake Como secondary home for the more discerning gentleman without sacrificing looks and performance. All of these reasons and more make the 308 GT4 a unique and collector worthy Ferrari.

The Ferrari 308 GT4 and The Modern Collector World

Thankfully over the past decade, the Ferrari 308 GT4 has rightfully appreciated and car collectors are taking a well deserved second look at this unique Ferrari. Although the car started its life as a Dino, a brand Enzo Ferrari was trying to introduce in honor of his son who passed away, the Dinos sported smaller displacements, such as the V8 and V6. Sadly, this confused many potential buyers although ti was then hailed as a great handling car, with every bit of a Ferrari DNA, minus the V12. This was even was made apparent when ex-Formula 1 champion Emerson Fittipaldi said it was one of the best GTs he had ever driven. Even the Le Mans winner Paul Frere who became a Road & Track test journalist said: it only has eight cylinders … but by any other standard it is a Ferrari.

The Beverly Hills Car Club has a stunning nero with tan interior 1975 Ferrari 308GT4, stock # 06352. This particular GT4 has its correct 5 speed manual transmission, power windows and air conditioning, as well as its jack and tool kit.

The 308 GT4 is a time capsule that has emerged unscathed from an era when Ferrari became etched in everyone’s minds as the exotic car maker. It innovated in many ways and opened up a new clientle for the company. I’ve always had a soft spot for this seemingly unassuming Ferrari that handles very well and had Enzo Ferrari’s personal attention. 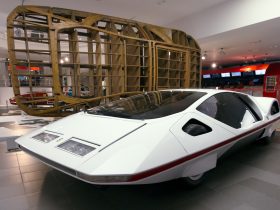 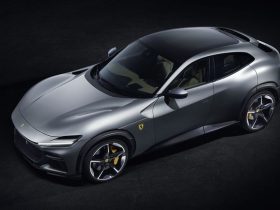