Vehicles should have personality and distinction. There are so many vehicles on the road today and most just blend in. Easily tossed into one automobile segment or another where it can be compared to others that are just like it. It’s kind of a superficial way of doing things. Thank goodness my tester this week has personality and doesn’t fit neatly into one segment or another.

But that’s what the MINI brand is kind of all about. The MINI brand is quirky, different and full of personality. It’s both a good thing and a bad thing. My tester this week is the MINI Cooper Countryman, which technically is a subcompact SUV. But it really belongs in its own segment and certainly can’t be compared to the ho hum entries in that segment. 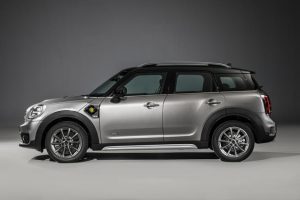 Even the looks are distinctive. There’s not another subcompact SUV that even resembles the MINI Countryman. From the unique striping on the hood, which is so typical of MINI, to the large headlights and the smallish grille, this is a vehicle that has personality and is easily identifiable. On profile it does look like a short, squatty crossover. The side mirrors have a matching color to the striped pattern on the hood, giving it a congruent look. The back side is equally youthful with an unusual spoiler and large, dominating taillights. Inside the taillights is LED pattern of the UK flag, paying homage to the MINI’s heritage.

My tester had the John Cooper Works (JCW) trim which brought even sportier touches like a blacked -out grille, red trim accent outside and inside. With the JCW this is a special and attractive vehicle. 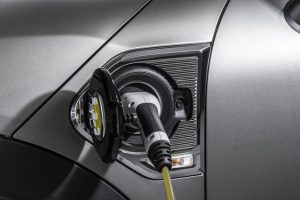 The Countryman is offered with three engine variants including a 134-horsepower 1.5-liter three-cylinder engine, a turbocharged 2.0-liter engine that makes 189 horsepower and the ALL4 which is a plug-in hybrid (PHEV) powertrain that combines the 1.5-liter three-cylinder engine with an electric motor to combine for 228 horsepower. This was what my tester had, and the combination of horsepower and torque was impressive for such a squatty little vehicle. The torque was great for off-the-line fun and the overall performance of the Cooper Countryman ALL4 felt like a go kart. The six-speed  automatic transmission felt outmatched at times with some hesitation between the gasoline and electric motors. It didn’t seem to handle the torque that was thrown around from the electric assist.

As quirky as the MINI is on the outside, it’s even more unusual, or distinctive inside. The MINI Cooper Countryman has tons of interior personality. The red theme from the JCW trim on the outside carries over on the stitching and dashboard inside. 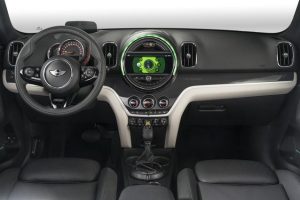 The circular infotainment screen dominates the dashboard. The ambient lighting that glows around it during the night adds a special charm. But that 8-8-inch circular screen is peculiar and part of the MINI’s awkward infotainment system. It’s really the only drawback to the vehicle. There’s a learning curve that once you overcome, you learn to accept it as part of the “charm” of this vehicle. Apple CarPlay and Android Auto redeem it a little bit.

The backseat fits three people, although really only two adults comfortably. The panoramic sunroof adds to the ambience and youthful feel of this vehicle’s interior. Behind the second row is 17.6 cubic feet of cargo room which is small for this segment. It’s more car-like than SUV-like. There’s 47.6 cubic feet of overall cargo room with rear seats folded down.

Starting price for the MINI Cooper Countryman ALL4 PHEV is $36,900. My tester had plenty of packages and offerings including the aforementioned JCW trim along with the Sport Edition which added a special appearance to this PHEV. As tested, this Countryman had a final MSRP of $45,750.

The gasoline-only engine has a fuel economy rating of 27 mpg average. With a fully charged motor (plug in), the fuel economy can increase to over 60 mpg. So, for those who want fewer trips to the gas station, this might be the PHEV for you with all of its cute little quirks plus the added fuel economy of the electric motor.

The MINI has always gone its way and done its own thing. Now it combines a unique appearance to go-kart performance with hybrid technology. This is a subcompact “SUV” I can get on board with.