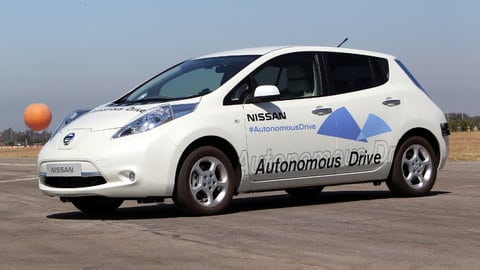 This weekend, there will be National Plug-In Day events held all over the nation, giving people everywhere a chance to get hands-on with some of the most innovative and efficient vehicles available today. National Plug-In Day, presented by Nissan and co-sponsored by Plug In America, the Sierra Club, and the Electric Auto Association, features cars from local dealerships and sponsorships from local organizations such as schools, labor unions, and area businesses. The events also have information for business owners and others who are interested in the electric vehicle (EV) infrastructure and how they can get involved locally to encourage its growth.  You can find an event local to you at pluginday.org.

At a special press preview event for National Plug-In Day, we got the chance to sample what will be going on this weekend all over the nation through the local coalition in the Denver, Colorado area. We attended the preview at the historic (and appropriate) Forney Museum of Transportation in Denver, sponsored by Nissan, Ford, IBEW Local 68, Xcel Energy, Boulder Hybrids, Denver Public Schools and Clean Cities Denver Metro Coalition. You can find out more about the Denver area National Plug-In Day event happening this Saturday by going to electricridecolorado.com.

Before things began, I toured the Forney museum, which houses some beautiful examples of automotive, locomotive, bicycle and motorcycle history, including one of the few examples of an as-original 1916 Detroit Electric Brougham Model 60 Type 16A Duplex Drive automobile (say that three times fast!). This car could be driven from the front or rear seats and is an amazing example of turn-of-the-century coach work. Contrasting that, once the Plug-In Day preview was underway, I became privy to some of the most innovative cars of our time.. all of which, a hundred years later, are using electricity as their primary drive source again.

Cars at the preview included the 2013 Nissan LEAF, one in a Plug In Day-specific body wrap and the other as the showcase vehicle for a local dealership, also body wrapped and with a light bar on the roof for the parade planned on the weekend. Also present was the 2013 Chevrolet Volt, including a red one, which I’m told can go faster. The beautiful Tesla Model S was present with two examples from a Denver-area dealership, which handles sales in Colorado, Oklahoma, Texas and parts of Wyoming, Arizona, Nebraska and Kansas. A local conversion company, which makes factory-approved conversions of Prius series hybrids to plug-in electrics capable of 100 mpg in mixed driving, was there to showcase how their great system works. Also on hand was a 2013 Ford C-MAX Energi brought by the lovely Heidi Swartzloff, our local Ford press representative who invited me to attend the event.

A total of seven vehicles for test drive were present, all capable of running on electricity alone and of being charged through a plug at any available outlet. Being the auto nerd I am, of course, I drove all of them. For the new model year, Chevrolet has made a few improvements to the extended-range electric Volt. Although there were two cars on-site at this preview, both of which I drove, they were identical except in color. I still think the red one goes faster.

The Chevy Volt is a car that’s coming into its own. Most of the improvements for 2013 are with the beleaguered MyTouch system, which can use all the improvement it can get, with some useful and intelligent Volt-specific updates. Otherwise, the car itself is largely the same as the 2012 model year. It rides well, seamlessly goes from engine to electric power, and has an upscale feel. The short drive in these two confirmed that it is a quality commuter car that has been mislabeled as a midsize sedan by the EPA. Ford’s Heidi Swartzloff showed gave me a refresher course in its features and we took a short drive to get a feel for its capabilities. It’s worth noting that unlike the other manufacture’s vehicles driven that day, the Ford system does not have an aggressive “battery mode” regeneration system (the LEAF and Toyota models use the shifter, the Tesla system is always-on), but instead uses brake pedal phases to accomplish the same task. For some drivers, this will be a more comfortable way of doing things as you get used to applying pressure to the brake pedal to either slow only using the regen system or slow faster using the brakes themselves. The 2013 LEAF has seen some improvement over the 2012 model. We were first introduced to this new edition at the Denver Auto Show when Nissan’s Lisa Farrar took us for a walkaround of the car (see that here). At the Plug-In Day preview, Nissan’s EV Business Development Manager Damian Herd gave us a reminder run on the 2013 model’s new features before we jumped in to take a drive.

The LEAF is a practical everyday car with all of the capabilities that made its chassis-mate, the Versa, a best-seller in its segment. A few improvements like remote climate control via your smart phone, an updated infotainment system with more LEAF-specific apps, and navigation upgraded to include near-real-time updates for plug-in locations make the LEAF an even more practical EV to drive. Aerodynamic and lightweighting updates also improved its range potential. Two Model S cars were brought to the event. A 60kWh base model (using the term “base model” is subjective when you’re talking about a Tesla) and the high-end sport package option in black. Differences between the two models are largely cosmetic and in the battery pack size. The base 60 has about a 230 mile range while the larger battery pack in the Sport has about 360 and features larger wheels, special trim, and interior upgrades for the higher-end.

The Model S is a highly refined luxury sedan that drives like a European sports machine. Tesla Ownership Advisor Joey Shaw of the Denver-area dealership gave us a grand tour courtesy of the huge iPad-like center console screen. Our drives in the two models included a seat-pressing acceleration run up a freeway on-ramp. If you can afford it, the Model S is a beautiful ride.

While we didn’t test drive the results, the everyday driver for the company from one of its founders was on hand to showcase how their conversion works. Any generation of Toyota Prius can be upgraded to a plug-in capable of 100 mpg in mixed use conditions and of an extended all-electric driving range as well as the capability of being recharged through any wall outlet or Level 2 charger. The conversions are done without voiding the car’s warranty and can include an official Toyota Plug-In Hybrid logo for the car – the ones used on the Prius v PHEV sold in California.

Boulder Hybrids specializes in Toyota Prius vehicles, doing maintenance, repair, and plug-in upgrades. They have a cool system and, while the up-front cost might be steep, the tax incentives in Colorado plus the long-term savings have a lot of potential for return on that investment for most drivers. It’s a very cool system and has evolved forward from when I first met these guys back in 2010 just before they changed from EVolve Electrics to Boulder Hybrids (read that here). You can find out more about this conversion process and Boulder Hybrids on their website at boulderhybrid.com.

National Plug-In Day Is This Weekend

All over the country this weekend, National Plug-In Day events will be taking place – one likely at a location near you. To find one you can attend, visit pluginday.org. These events will give you a chance to find out what incentives and grants might be available locally for both plug-in vehicle purchase and charging station installations plus you’ll have the opportunity to test drive some of the PHEV options available to consumers right now.